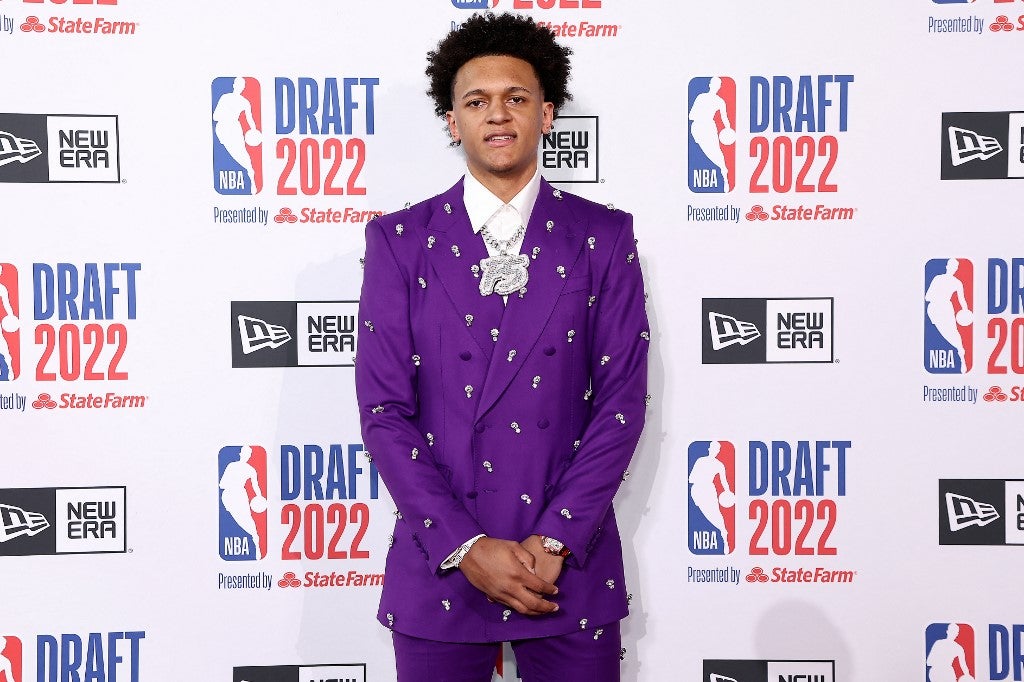 Paolo Banchero poses for photos on the red carpet during the 2022 NBA Draft at Barclays Center on June 23, 2022 in New York City. Arturo Holmes/Getty Images/AFP

Paolo Banchero never saw himself being the No. 1 overall pick in the NBA Draft.

But Banchero will always be recalled as the first player picked in the 2022 festivities after the Orlando Magic selected the Duke forward first overall in the NBA Draft on Thursday night in New York.

A couple minutes prior to the start of the draft, Banchero’s agent, former NBA player Mike Miller, told him to be ready for anything.

That refrain suddenly had meaning to Banchero when the Magic turned in the pick.

No. 1 pick Paolo Banchero (@Pp_doesit) talks about what he's bringing to the @OrlandoMagic.

The 2022 #NBADraft presented by State Farm continues on ABC and ESPN pic.twitter.com/uIHHcqgBoV

“About 20 to 30 seconds before the commissioner (Adam Silver) went out to announce the pick, (Miller) looked at me and said, ‘Congratulations,'” Banchero said on ABC.

The 6-foot-10 Banchero averaged 17.2 points and 7.8 rebounds per game in his one college season. He also contributed defensively with 41 steals and 36 blocked shots.

“I can’t believe what just happened, honestly,” Banchero said. “I never would have thought this would happen. I wanted to be in the NBA, I didn’t know I would be (No. 1). This is unbelievable.”

This was the fourth time the Magic selected first overall in the NBA Draft. Orlando drafted Shaquille O’Neal in 1992, Chris Webber (traded to the Golden State Warriors) in 1993 and Dwight Howard in 2004.

The Magic went 22-60 last season, the second-worst record in the NBA. Orlando won the right to pick first in the draft lottery. NBA commissioner Adam Silver (L) and Chet Holmgren pose for photos after Holmgren was drafted with the 2nd overall pick by the Oklahoma City Thunder during the 2022 NBA Draft at Barclays Center on June 23, 2022 in New York City. Sarah Stier/Getty Images/AFP

Holmgren is the highest draft pick produced by Gonzaga. The previous best was Adam Morrison, who went third overall in 2006 to the then-Charlotte Bobcats.

“It’s a mix of 1,000 emotions and yet I have zero words to explain it,” Holmgren said. “Everything I’ve looked forward to for a long time, OKC Thunder, let’s work, let’s work.”

Holmgren averaged 14.1 points and 9.9 rebounds and matched the school record of 117 blocks. Brandon Clarke, now with the Memphis Grizzlies, set the mark in the 2018-19 season.

Smith was billed by many draft experts as the probable No. 1 overall pick but didn’t seem the least bit dismayed about going third. He will have a chance to make an immediate impact with the Rockets.

“I can fit any NBA system with my shooting ability and my love for defense,” Smith said. “I can come right in and make an instant impact.”

Smith, who averaged 16.9 points and 7.4 rebounds for the Tigers, is the highest-drafted player in Auburn history. Chuck Person (1986, Pacers) and Chris Morris (1988, Nets) both went fourth.

The Sacramento Kings tabbed Iowa forward Keegan Murray with the fourth selection. The 6-foot-8 Murray is the first Iowa player to be chosen in the first round since Ricky Davis in 1998.

“They are getting a winner, first and foremost,” Murray said of going to the Kings. “I’m very versatile. I hit a late growth spurt so I have a lot of room to grow in my game and I’m excited to get to that.”

The Detroit Pistons took 6-foot-4 guard Jaden Ivey out of Purdue with the No. 5 pick.

“I worked day-in and day-out just to get this level,” said a highly emotional Jaden Ivey. “I wouldn’t be here if it wasn’t for (my mother). I’m just so happy.”

“This is his dream come true. For him to walk on this stage, I’m so joyful and I’m so happy for him,” Niele Ivey said.

Mathurin was Pac-12 Player of the Year, while Sharpe is a bit of a mystery since he was a highly-acclaimed recruit who practiced with Kentucky last season but decided not to play in games.

“I think I still should be a mystery because you haven’t seen me for a year,” Sharpe said. “But I can’t get wait to get started. It’s going to be a ride, for real.” Dyson Daniels hugs family after being drafted with the 8th overall pick by the New Orleans Pelicans during the 2022 NBA Draft at Barclays Center on June 23, 2022 in New York City. Sarah Stier/Getty Images/AFP

French forward Ousmane Dieng went 11th to the New York Knicks but is reportedly on his way to Oklahoma City in a trade.

The Thunder were on the board at No. 12 and chose guard Jalen Williams, who became the first Santa Clara player to be drafted since legendary Steve Nash went 15th overall to the Phoenix Suns in 1996.

“It’s an honor to even be in that conversation with him,” Williams said of Nash, a two-time NBA MVP. “It’s really a blessing and kind of a dream come true.”

Memphis center Jalen Duren was selected 13th by the Charlotte Hornets but reportedly will be traded to the Detroit Pistons.

No. 5 pick Jaden Ivey (@IveyJaden) talks about the advice his mom, @IrishCoachIvey gave him ❤️

2022 #NBADraft presented by State Farm on ESPN and ABC. pic.twitter.com/8J8QwOxnOe

Kansas star Ochai Agbaji went to the Cleveland Cavaliers at No. 14. Agbaji averaged 18.8 points as the star player for the national champion Jayhawks.

The Hornets picked Duke center Mark Williams at No. 15, and the Atlanta Hawks chose Duke forward A.J. Griffin at No. 16. LSU forward Tari Eason went to the Rockets at No. 17, and the Chicago Bulls used the 18th pick on Arizona guard Dalen Terry.

Duke had a fourth player selected in the first round when forward Wendell Moore Jr. was picked 26th overall by the Dallas Mavericks. However, Moore reportedly is slated to join the Minnesota Timberwolves as part of a deal that also involved the Houston Rockets.

A fifth Blue Devil was tabbed in the second round as guard Trevor Keels went to the New York Knicks with the 42nd overall pick.

The final selection was Hugo Besson, a guard from France who went to the Indiana Pacers with the 58th pick.

The two-round draft consisted of 58 selections instead of 60 because the Milwaukee Bucks and Miami Heat lost picks due to tampering violations. The Bulls also were found guilty of tampering but didn’t have a second-round pick in this year’s draft.