John Isner out of Wimbledon despite new aces record 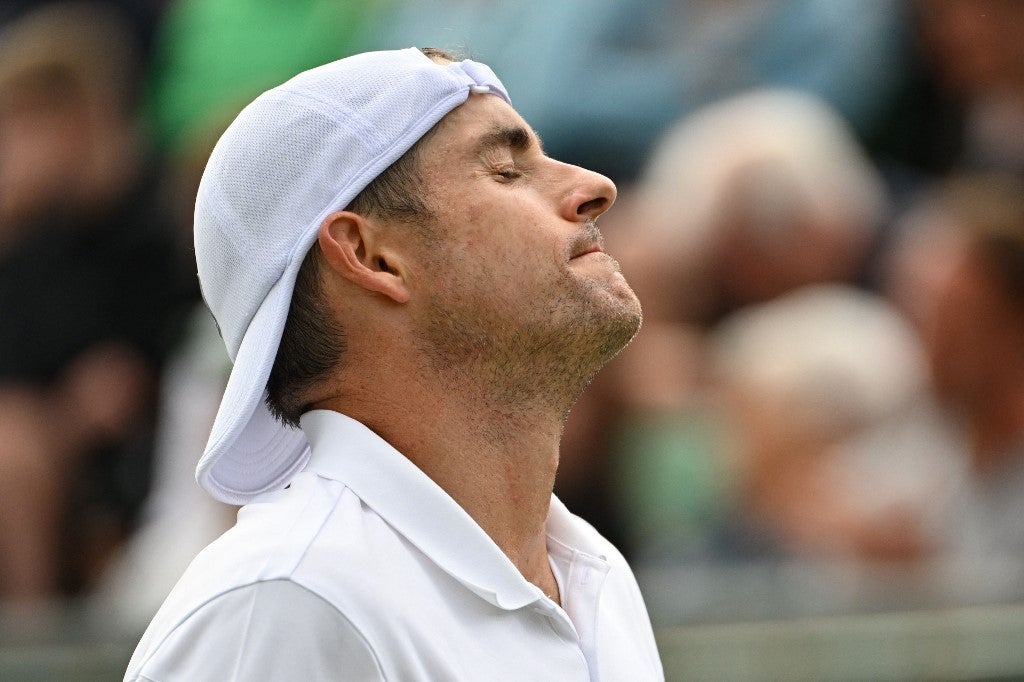 US player John Isner reacts as he competes with Italy’s Jannik Sinner during their men’s singles tennis match on the fifth day of the 2022 Wimbledon Championships at The All England Tennis Club in Wimbledon, southwest London, on July 1, 2022. (Photo by SEBASTIEN BOZON / AFP) /

John Isner set a new record for the number of career aces in his third-round match at Wimbledon on Friday but it was not enough to overcome Italy’s Jannik Sinner.

The Italian, who did not face a break point in his two-hour, 20-minute triumph, will play 19-year-old Carlos Alcaraz in the last 16.

Isner started his match against the 10th seed four aces behind Croatia’s Ivo Karlovic, who has served 13,728.

The 37-year-old, who dumped Andy Murray out in the previous round, broke the record in the third game of his match on Court Two with his fifth ace.

“I’m actually very happy to break the record here,” said Isner, who admitted he was not at the top of his game on Friday.

“To do it at this tournament I think is pretty cool. Makes it maybe a little more special than to do it at a tournament not of this magnitude.”

"It was an incredible honour to play him on this court"@JohnIsner pays tribute to Andy Murray after notching a first career win over the Brit#Wimbledon | #CentreCourt100 pic.twitter.com/O70rDRTvoA

Andy Roddick, the last US man to win a Grand Slam singles title, way back in 2003, tweeted that Isner’s serve was the “best ever” as he closed in on the aces record.

“I’d trade my old one for his immediately without thinking twice,” he said.

Isner, who stands six feet 10 inches (208 centimeters) tall, is also in the record books for taking part in the longest match in tennis history in 2010, against Frenchman Nicolas Mahut.

A plaque was unveiled outside Court 18 at Wimbledon to commemorate the contest, which lasted 11 hours and five minutes.

“Give him another plaque,” US tennis great John McEnroe said on ESPN.

Isner said it was encouraging to see so many American men still in the tournament — eight made the third round, the most at Wimbledon since 1995.

“You want to, first and foremost, get maybe at least two players in the top 10, and then maybe you can really talk about some of these guys doing some good things,” said the veteran, who reached the semi-finals at Wimbledon in 2018.

“I think that is still to come, actually. Yeah, I know Frances (Tiafoe) and Tommy (Paul) are in the round of 16, and, you know, there is a handful of guys tomorrow that have an opportunity to meet them in that round, as well. They are doing great.”