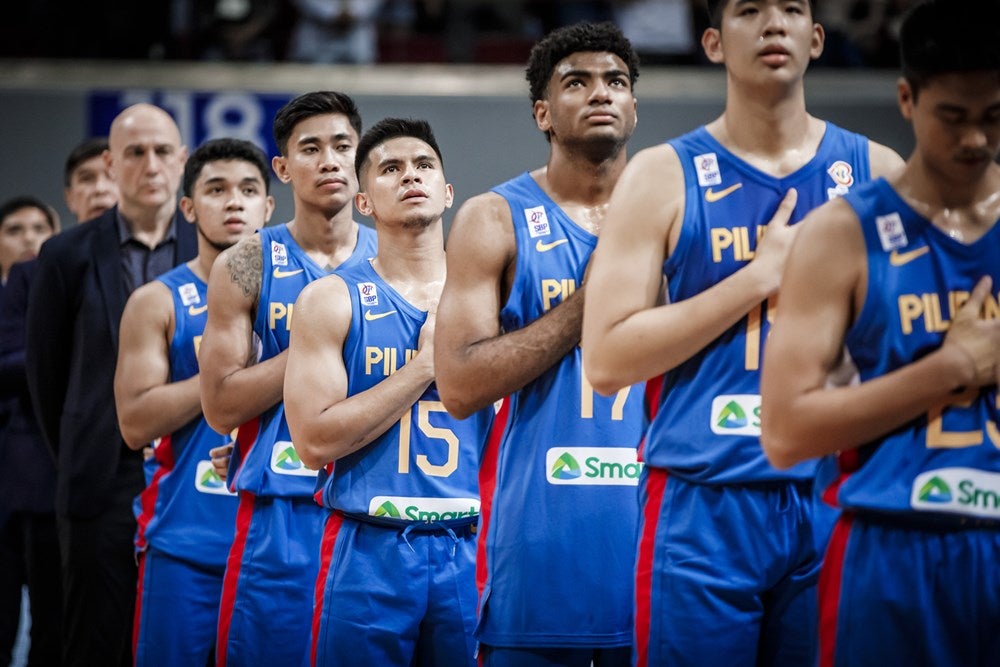 Gilas Pilipinas before taking on India in the Fiba World Cup Asian Qualifiers at Mall of Asia Arena. Photo by Fiba

MANILA, Philippines—Kiefer Ravena is relishing his new niche being one of the elder statesmen on a young Gilas Pilipinas side.

The 28-year-old guard, who used to be one of the young guns in the Philippine men’s basketball team the past years, now enjoys his role as ‘kuya’ to his young teammates like RJ Abarrientos, SJ Belangel, and Carl Tamayo in their recent stint in the Fiba World Cup Asian Qualifiers third window.

“They are fun to be with. It makes me feel younger,” said Ravena in Filipino after their 79-63 win over India on Sunday, ending their first round campaign of the Fiba World Cup 2023 Asian Qualifiers on a high note.

The national team mainstay, who delivered 12 points, four assists, and two steals, shared that he is also willing to learn new things from his young teammates, who are mostly born in the 2000s with the 19-year-old Francis Lopez being the youngest.

“I’m honored that I am still part of the process to become better as a player and better individual. I’m willing to learn from these young men,” Ravena said.

The Shiga Lakestars guard is impressed the most with fellow Japan B.League import Dwight Ramos and Tamayo as well as Belangel and Abarrientos, whom he took under his wings.

“I kinda took it upon myself to take them under my wings, especially both of them are playing overseas,” said Ravena on both young guards, who are set to play in the Korean Basketball League.

“I talk to them every time there is an opportunity, through breakfast, dinner, or lunch, whatever on and off the court.”

Ravena is also happy to help Gilas Pilipinas regain its winning ways after back-to-back losses to Korea in a pair of international friendlies and a 46-point loss to New Zealand, which was a big reality check for them.

“It feels good getting back on track. We got a big, big reality check against New Zealand. It kept our feet on the ground, it kept us humble, and at the same time, we learned our mistakes and where we want to be, at what level in the future,” Ravena said. “Hopefully, this is a sign for a lot of improvement for the team, for the program.”

Ravena and the young Gilas team will have a short break as they will shift their focus to the Fiba Asia Cup from July 12 to 24 in Jakarta, Indonesia.