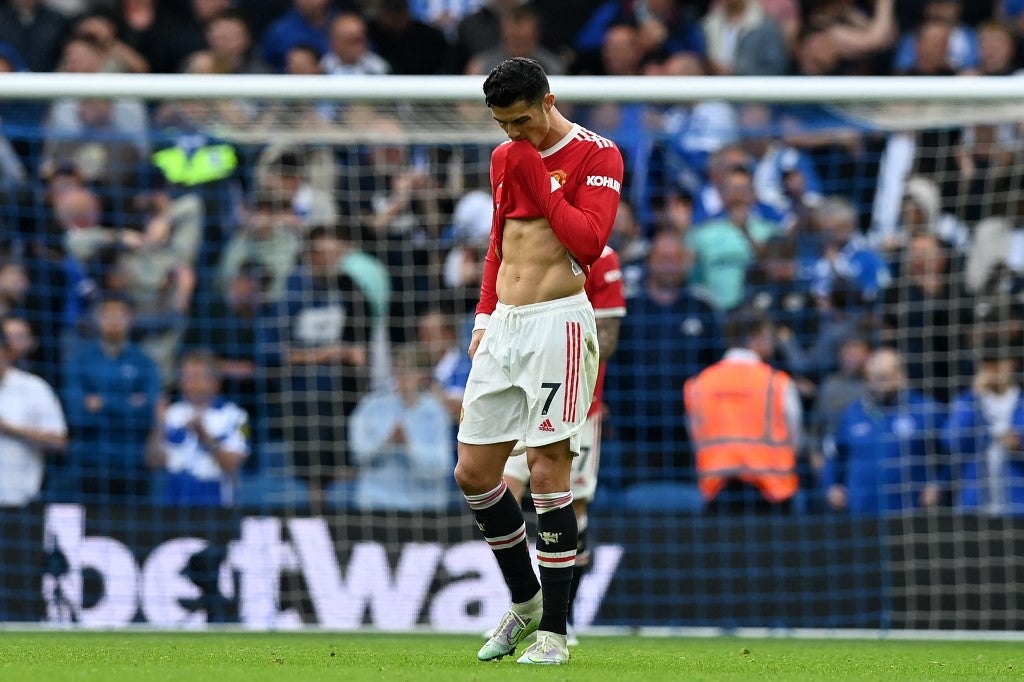 Manchester United’s Portuguese striker Cristiano Ronaldo reacts as another goal goes in for Brighton during the English Premier League football match between Brighton and Hove Albion and Manchester United at the American Express Community Stadium in Brighton, southern England on May 7, 2022. (Photo by Glyn KIRK / AFP)

Cristiano Ronaldo missed training with Manchester United on Monday due to “family reasons”, just days after the Portugal star reportedly told the club he wants to leave.

United players who had been away on international duty over the close season were scheduled to meet up with the rest of the squad on Monday.

But, according to British media reports, Ronaldo did not attend, with his reason for failing to appear at United’s training ground accepted by the club.

However, the 37-year-old’s absence will be interpreted as the latest salvo in his bid to engineer a move away from Old Trafford.

Ronaldo is said to be disappointed by United’s decline since he returned to the club from Juventus last year.

United failed to qualify for this coming season’s Champions League after finishing sixth in the Premier League.

Despite the arrival of new manager Erik ten Hag from Ajax, Ronaldo reportedly does not believe United can challenge for major honors in the near future.

In the twilight of his career, Ronaldo would prefer to join a club capable of satisfying his desire to compete for the game’s top prizes.

Five-time Ballon d’Or winner Ronaldo, who has a year left on his United contract, has played 19 consecutive seasons in the Champions League and is the tournament’s all-time leading scorer.

The former Real Madrid star’s agent Jorge Mendes has reportedly sounded out Bayern Munich and Chelsea about a potential move, yet United is said to be adamant Ronaldo is not for sale.

Ronaldo was United’s top scorer with 24 goals last term, but his campaign was marred by public shows of frustration on several occasions as the team struggled under first Ole Gunnar Solskjaer and then interim boss Ralf Rangnick.

Ronaldo’s absence from training comes as United are due to leave for their pre-season tour of Asia and Australia on Friday.