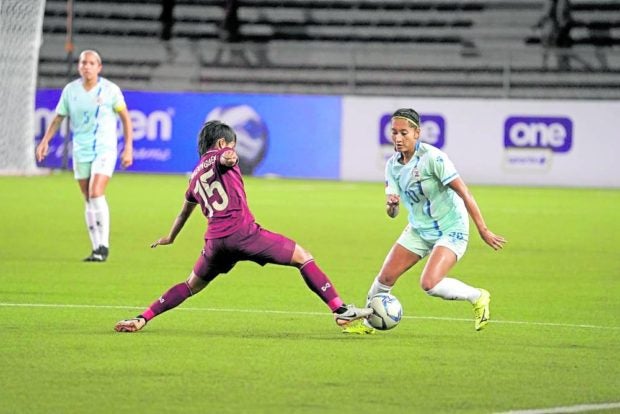 Another defensive miscue at the back finally cost the Philippines, and its first defeat in the Asean Football Federation Women’s Championship will likely result in a semifinal duel with a regional heavyweight.

The Filipinas witnessed the biggest crowd since the start of the competition but most of 2,923 fans at Rizal Memorial Stadium on Tuesday were left disappointed as Kanyanat Chettabuhr’s goal gave Thailand a 1-0 victory.

Kanyanat’s winner came in the 75th minute when defenders Dom Randle and Sofia Harrison and goalkeeper Olivia McDaniel misjudged a high-bouncing ball which spelled the difference in the hard-fought affair.

“Unfortunately, one error costs us the game,” lamented a disappointed coach Alen Stajcic.

The loss proved to be doubly stinging as Thailand snatched the top spot in Group A with 13 points while the Philippines settled for a runner-up finish with 12 points.

That may put the Filipinas in a tough situation in Friday’s semifinal against the top team of Group B, which will be contested by defending champion and Southeast Asian Games gold medalist Vietnam and dangerous Myanmar.

Vietnam and Myanmar will face off on Wednesday at 7 p.m. to determine the Group B winner. The loser of that duel, which will be played also at Rizal Memorial, battles Thailand in the semifinals.

Unlike in the previous match when they were able to pull off a 4-1 win over Indonesia despite conceding an opener off keeper Inna Palacios’ mistake, the Filipinas couldn’t turn things around this time.

And it wasn’t for lack of trying.

“We had enough chances to win the game,” said Stajcic. “They had two or three chances, we probably had a few more than them and we didn’t put them away and we got punished by one error and that’s what happens in international football against good teams.”

The Filipinas needed at least a draw coming into the match to secure first place in the group, but several opportunities went for naught throughout the match. The Philippines had already been assured of a semifinal berth after sailing its way to four straight wins.

Thailand’s fate, on the other hand, was still up for grabs. And the Thais went in with a sense of urgency befitting their situation

A left-footed shot by Jessika Cowart in the first half was saved by Thai keeper Chotmanee Thongmongkol while one counterattack led by Katrina Guillou and a close-range shot by Quinley Quezada in the restart went futile.

There were little chances to salvage a draw, even if Sarina Bolden, the hat trick star against Indonesia and the tournament’s top goalscorer, came on less than 10 minutes to go.

At the final whistle, the Philippines left Rizal Memorial with things to ponder in the next two days.