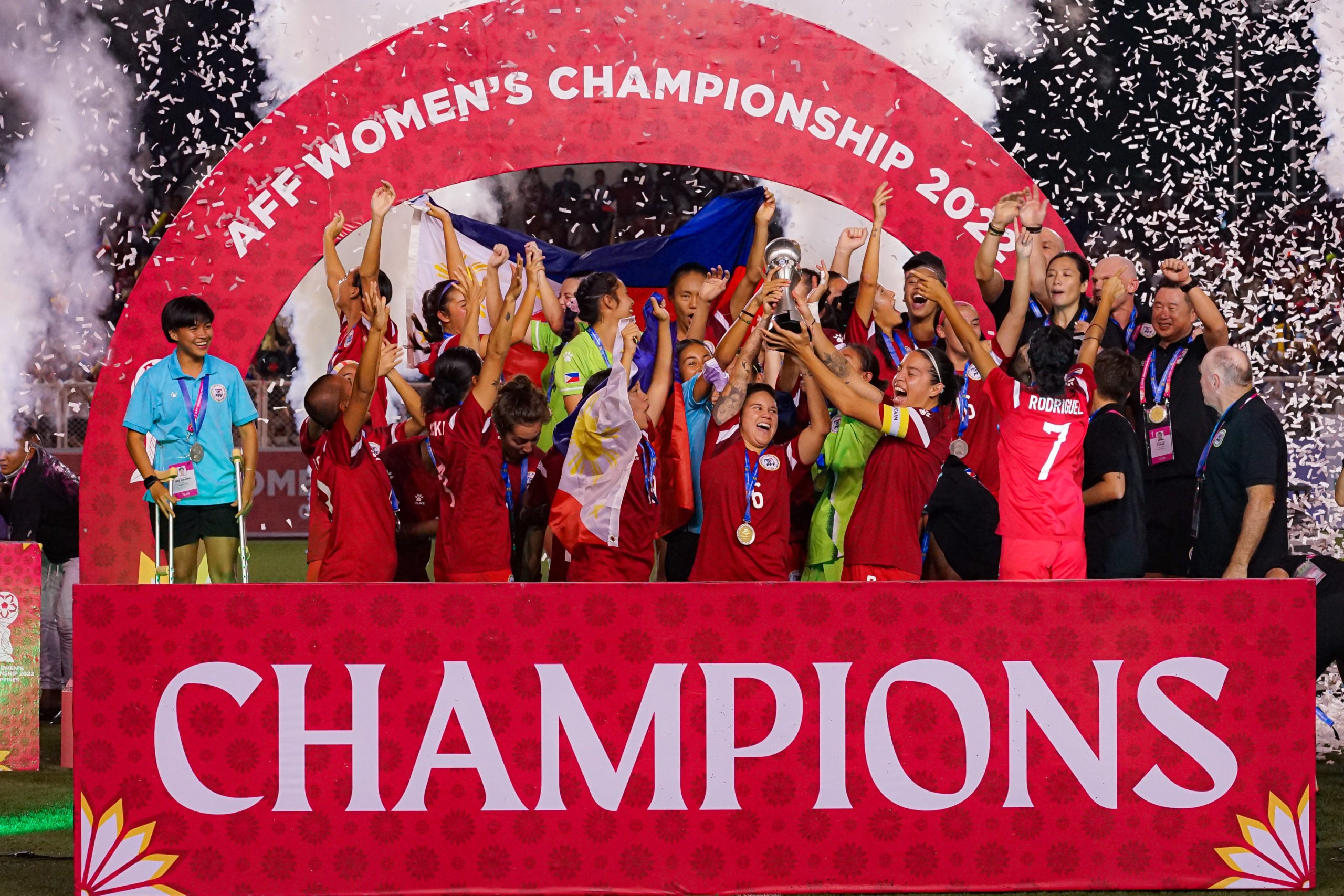 The Filipinas (photo above) celebrate in the din of fireworks and sprays of champagne after blanking Thailand, 3-0, for the country’s first Asean Football Federation Women’s Championship title on Sunday before a banner crowd at the Rizal Memorial Stadium pitch. –PFF PHOTO

Members of the Philippine women’s football team looked restless after having the time of their lives the crazy night before as they met members of the media the day following their successful conquest of the Asean Football Federation (AFF) Women’s Championship.

“We had fun,” said Hali Long, the team’s veteran defender during a press conference held on Monday at Crimson Hotel in Alabang, Muntinlupa City.

Long and Co. had reason to enjoy the sweet taste of its 3-0 romp of Thailand until the wee hours of the morning after spending incomparable time preparing for what turned out to be the latest feat for the team that continues to break barriers.

Winning the regional tournament has put the Philippines in the discussion as one of the best women’s teams in Southeast Asia.

The Filipinas did that behind a performance that captured the hearts of local sports fans after taking down perennial heavyweights Vietnam, the previous winner in 2019, and Thailand, which holds the most trophies with four.

Once the euphoria of taking the Asean crown dies down, it will be back to business for coach Alen Stajcic’s squad as it hopes to conquer new horizons while continuing to prepare for next year’s Fifa (International Federation of Association Football) Women’s World Cup.

“We got some big, big challenges looking ahead … to conquer the rest of Asia and the World Cup. This is an unbelievable achievement, but I’ve always kept my one eye on the future knowing how much more we have to work hard on to keep growing this game and keep the team even more successful,” he added.

For that to be achieved, the Filipinas are set for camps and friendlies overseas, perhaps more demanding than the ones they had in the lead-up to the AFF tourney.

Team manager Jeff Cheng said plans are for the Filipinas to resume training starting in late-August with friendlies slated during the Fifa international calendars later in the year.

“Hopefully we can get some friendly games, probably in the US and maybe against New Zealand whose gonna fly there and other options we have on the table,” said Cheng.

“But definitely, there will be a camp during the Fifa window. And then in September and October as well, we’ll try to get a few friendly games lined up.”

Stajcic would prefer facing teams with a different approach which he believes can help the team get as much time to get a hint on what they’ll experience by the time Fifa’s premier showcase rolls on in Australia and New Zealand.

“We would like to play maybe the best teams we can. And when the World Cup draw [in October] comes out, we’ll try to play teams that we need to focus on so we can get used to that playing style and competitiveness of the World Cup,” said the Aussie mentor.

The Filipinas carved out the title win before 8,257 fans at Rizal Memorial Stadium, an attendance figure not seen in years. It’s a testament to how the ladies have likely put themselves in the consciousness of many.

“The Philippines has a reason to remember us even more,” said Sarina Bolden after an eight-goal performance in the tournament.