With defeat to Raducanu, Serena running out of time to find form for US Open | Inquirer Sports

With defeat to Raducanu, Serena running out of time to find form for US Open 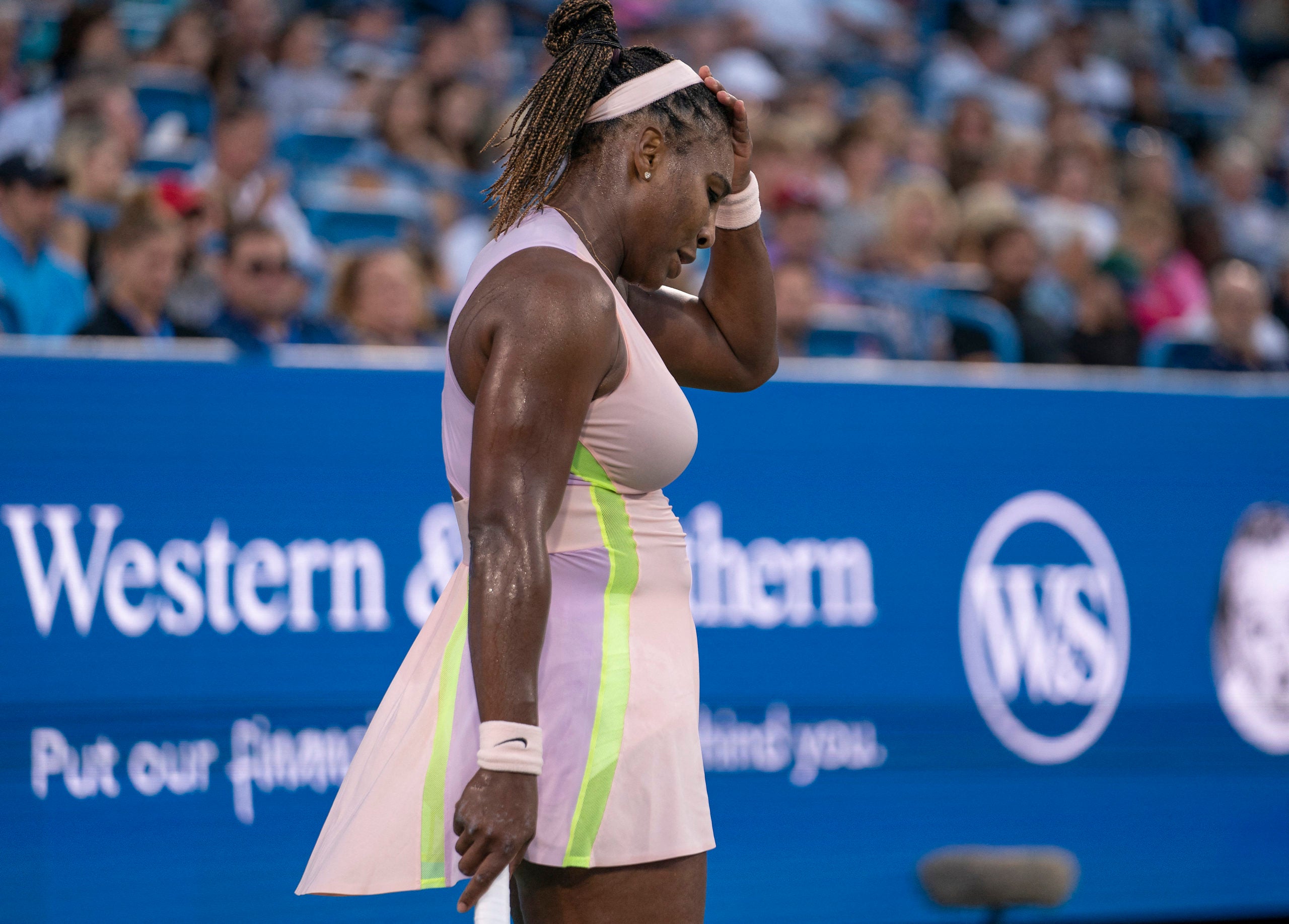 Serena Willams (USA) reacts to a point in her match against Emma Raducanu (GBR) at the Western & Southern Open at the at the Lindner Family Tennis Center. Mandatory Credit: Susan Mullane-USA TODAY Sports

Serena Williams’ farewell tour suffered another bump in the road on Tuesday with a 6-4 6-0 opening round loss to Emma Raducanu at the Cincinnati Open, one of the last tune-up events before the final Grand Slam of the American great’s career.

Williams has just one professional tournament remaining before the U.S. Open, where she will have one last chance to tie Margaret Court’s record of 24 Grand Slam titles.

After a sluggish start in the WTA 1000 event in Cincinnati, Williams gave the sold-out crowd something to cheer about in the first set when she crushed back-to-back aces to cut reigning U.S. Open champion Raducanu’s lead to 4-3.

But the British 19-year-old fired back an ace of her own to snag the first set and followed that up with a break of serve to open the second.

Raducanu rolled on from there, smacking an unreturnable serve on match point to end their first career meeting, setting up a clash against two-time former major winner Victoria Azarenka.

Williams waved to the crowd before walking off court and did not speak to the media later.

“I think we all just need to honor Serena and her amazing career,” Raducanu said on court.

“I’m so grateful for the experience of getting to play her and for our careers to have crossed over. Everything she has achieved is so inspirational and it was a true honor to get to share the court with her.”

Williams, who will turn 41 next month, was world number one and had already won four major titles when Raducanu was born in November 2002. She won her last major in 2017 while pregnant with her daughter Olympia, who was in attendance. Earlier in the day, Naomi Osaka’s U.S. Open preparations suffered another setback as the former world number one was swept aside 6-4 7-5 by China’s Zhang Shuai.

It was Osaka’s third tournament back from an Achilles’ tendon injury and it has been a stuttering return to action for the twice U.S. Open champion, who also exited in the opening round in Toronto last week, retiring with lower back pain.

Osaka got her serve working, firing down 10 aces, but not much else, with the four-time Grand Slam winner piling up 29 unforced errors and converting just one of four break chances.

American teenager Coco Gauff, runner-up at this year’s French Open, rolled her left ankle late in the first set of her match against qualifier Marie Bouzkova and eventually retired while trailing 7-5 1-0.

Amanda Anisimova withdrew from her match against fellow American Shelby Rogers due to a left ankle injury while second seed Anett Kontaveit progressed to the round of 16 after a rain-interrupted 3-6 7-5 6-4 win over qualifier Tereza Martincova.