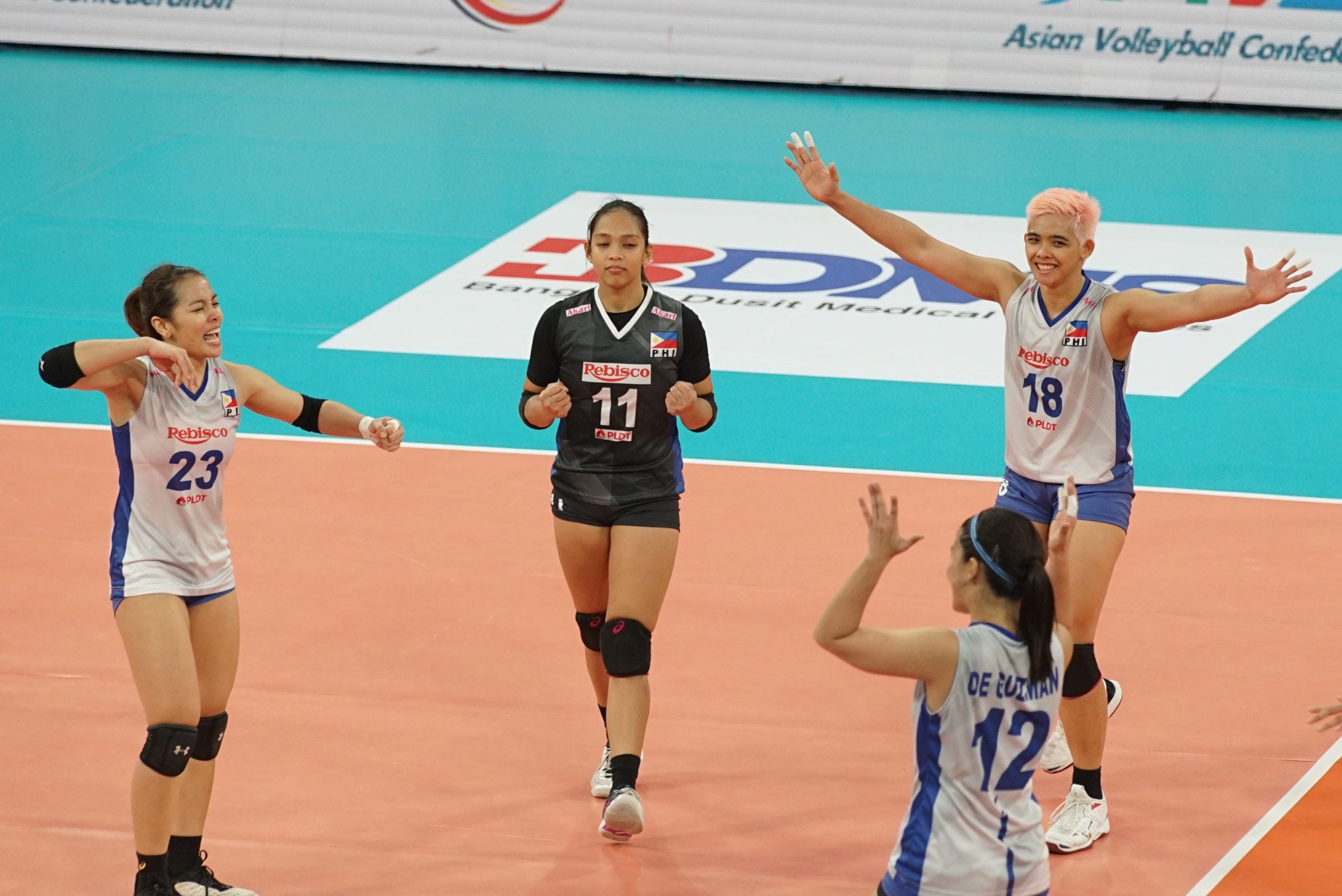 MANILA, Philippines — Jema Galanza delivered the big hits in the fourth set as the Philippine women’s volleyball team took down Iran, 25-19, 25-22, 20-25, 25-14, to earn its first victory in the AVC Cup on Wednesday at PhilSports Arena.

The Creamline Cool Smashers, once again, relied on the troika of Jema Galanza, Tots Carlos, and Michele Gumabao to take a two-set lead before dropping the third set, where they trailed as many as seven, 12-19.

But Galanza displayed grace under pressure in the fourth set, scoring eight of her 21 points to build a formidable 23-11 lead. Iran scored three straight points but Mahsa Khadkhoda’s attack hit the antenna putting the Philippines at matchpoint, 24-14, before Galanza nailed the match-winning attack to end the game in two hours and 12 minutes.

The Philippines tied Iran in Pool A with identical 1-2 records and will try to clinch the No.3 seed heading to the quarterfinals in its last group stage assignment against winless South Korea (0-3) on Thursday at 7 p.m.

“In the third set, Iran really set the first pace of the game. We had a hard time catching up because we didn’t have the first ball since their height is really intimidating. But good thing we received well and had good combination plays in the fourth,” said Creamline head coach Sherwin Meneses in Filipino.

Carlos scattered 12 spikes and two blocks to finish with 14 points, while Gumabao had 13 points, including the timely hits in the first two sets that gave her team a 2-0 lead.

The Iranians gave up 27 errors in the match as the Cool Smashers outplayed them in attacking, 55-43.

Elahe Shahdehsari led Iran with 13 points, including two aces, Khadkhoda added nine markers as they suffered their second straight loss in three games before wrapping up the preliminary stage against defending champion China (3-0) also on Thursday.

Read Next
Petra Kvitova gets engaged to coach in ‘special place’ at Wimbledon
EDITORS' PICK
How not to retire as an ex-president
Shop smarter with vivo’s big 12.12 holiday deals
House energy committee chair Arroyo bats for cheap electricity
Hidilyn Diaz wins only gold missing from her collection
The vivo Y02 is now available in the Philippines for only PHP 5,299
Lawmakers eyeing more changes in Maharlika plan
MOST READ
Jovit Baldivino, ‘Pilipinas Got Talent’ winner, dies at 29
LPA enters PAR, to likely strengthen into tropical depression in coming days – Pagasa
Andi Eigenmann, family in Manila for a quick visit; Ellie dines with grandma Jaclyn Jose
11 Filipino imports named to Japan B.League Asian All-Star team
Don't miss out on the latest news and information.