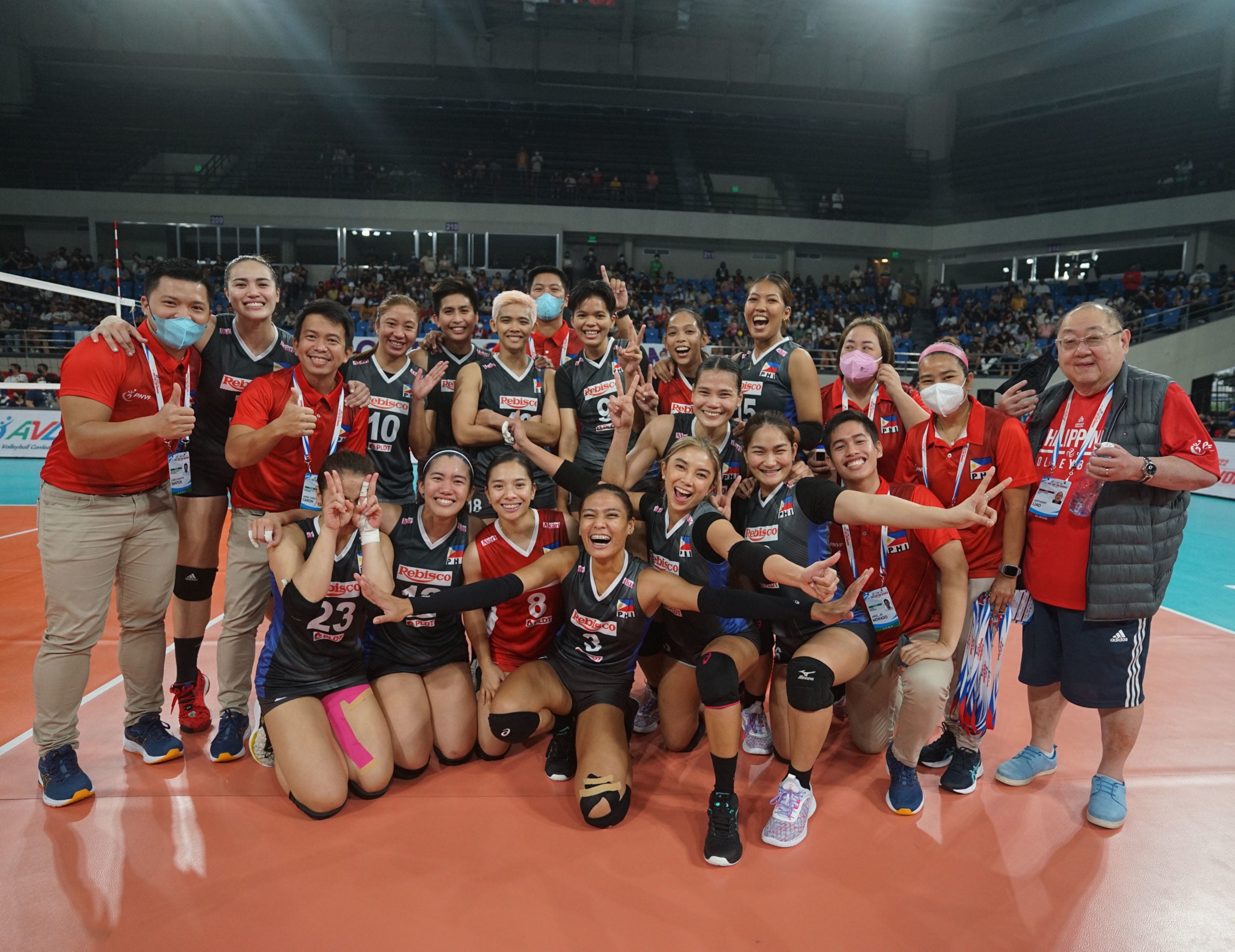 Creamline-Philippines after beating Australia in comeback fashion in the AVC Cup for Women. AVC PHOTO

MANILA, Philippines — The Philippine women’s volleyball team settled for sixth place in the AVC Cup, bowing to Chinese Taipei, 26-28, 21-25, 21-25, in their classification match on Monday at PhilSports Arena.

The weary Filipinos, who played six games in seven days, put up a gallant stand in each set but the Taiwanese, led by Chang Li-Wen, nailed the crucial hits to complete a sweep in one hour and 53 minutes.

“Our team, Creamline-Philippines, we’re really happy to be given this kind of opportunity. Hopefully, we will learn and improve since we earned the highest finish of the Philippines in the tournament,” said Creamline head coach Sherwin Meneses in Filipino.

“Our three wins are a blessing for us,” he added.

Chang unleashed 18 points built on 14 spikes, three blocks, and an ace, including the clutch attacks in the third set to seal the fifth place.

After falling short in the first two sets, Creamline kept fighting and even erased a 14-17 deficit with Michele Gumabao and Jema Galanza tying the frame, 20-20.

But Chang scored three straight points for a 23-20 advantage before Galanza stopped the bleeding. Chen Tzu-Ya brought the Taiwanese at match point, 24-21, followed by a crucial service error by Tots Carlos, who was scoreless in the third.

Celine Domingo led the Philippines’ valiant effort with 12 points. Setter Jia De Guzman had another day at the office providing the brilliant plays while Gumabao had nine points and Galanza and Jeanette Panaga chipped in eight markers each, while Carlos was limited to just seven.

Despite the loss, Creamline still delivered the country’s best finish in the continental meet, surpassing the ninth place in the 2018 edition.

The last-minute notice didn’t deter the Cool Smashers, who beat KingWhale Taipei to win the Premier Volleyball League Invitationals crown, from an impressive showing by winning three of their seven games. They also put up quality performances against powerhouse squads China, Vietnam and Thailand even minus star spiker Alyssa Valdez.

“If we were complete, we could have earned better results because we are coming from a championship run in the PVL. But of course, we’re still thankful because everyone stepped up in this tournament. They gave their best and showed their familiarity and team chemistry,” Meneses said. “I thank my players for never giving up in the tournament.”

The only team that the Philippines didn’t face is Japan, which takes on China in the championship.

The Philippines erased a 20-24 deficit in the opening set with Carlos scoring three of Creamline’s next four straight points to tie it up but Chinese Taipei still managed to hold on to take the set thanks to setter Hsieh Yi-Chen and Liu Shuang-Ling.

Gumabao kept the home team afloat in the second set, keeping the visitors within one, 21-20, but her service error led to the crucial hits of Chang to take the 2-0 lead.