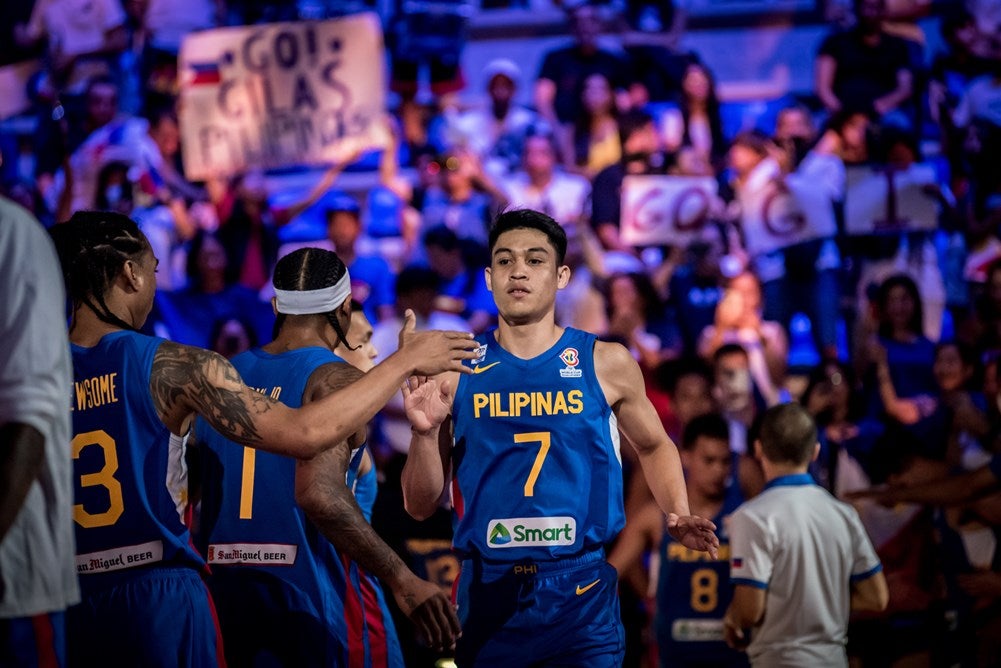 FILE – Gilas Pilipinas forward Calvin Oftana during a game against Lebanon in Beirut. – Oftana impressed former Philippine team star Marc Pingris in his limited time on the floor against Saudi Arabia at Mall of Asia Arena. Photo by Fiba

MANILA, Philippines — Former national team star Marc Pingris sees a lot of potential in the new breed of Gilas Pilipinas, which dominated Saudi Arabia in the Fiba World Cup Asian Qualifiers in front of 19,829 fans at Mall of Asia Arena on Monday night.

But among the young guns on the team, the player who really caught Pingris’ attention was newcomer Calvin Oftana.

(I like our young players. I like how number seven played. I told daddy Vic earlier that he (Oftana) made the most of the time given to him. I like his defense, I really like how he plays, he’s a role player who can score. What more if he is given more playing time.)

Oftana, the former NCAA MVP out of San Beda who now plays for NLEX in the PBA, posted six points, shooting two-of-three from the field, and had a rebound and a block in only 10 minutes of play, doing just enough to make a good impression on Pingris.

“I like his game, especially his defense. I hope to meet you soon,” Pingris said in Filipino.

Although he saw a lot of potential in the current national team, Pingris is putting premium on team chemistry for them to be successful just like the Gilas team he was part of that delivered the country’s first trip to the Fiba World Cup in 36 years back in 2014.

“Their game is okay. They gave their best, making the fans happy, But they have to work more on their chemistry. That’s number one,” he said.

“They have to practice longer because this line-up is strong, promise. Jordan’s presence is really huge for the team. Kai is also there with Japeth (Aguilar) making this line-up taller compared to us before. But even they have a strong roster, they need chemistry. Like what we did years ago, we practiced for two months and formed a strong bond,” he added.

Gary David said last week that their batch was the best Gilas. But Pingris said all national teams have different strengths. And this current crop has the potential to surpass what they achieved.

“For me, all our lineups are the best. This team can surpass what we did before as long as they will be united and will help each other. As I said, chemistry will help them achieve things and reach greater heights,” the 6-foot-4 forward said.

“They need to strengthen their bodies because playing against teams like Iran, Jordan, and China is physical. They just need to follow their coach, embrace their roles, and play their hearts out every game,” he added.

The Philippines will play two more windows in November and February next year before having a full three-month preparation starting in May for the World Cup 2023 in August.