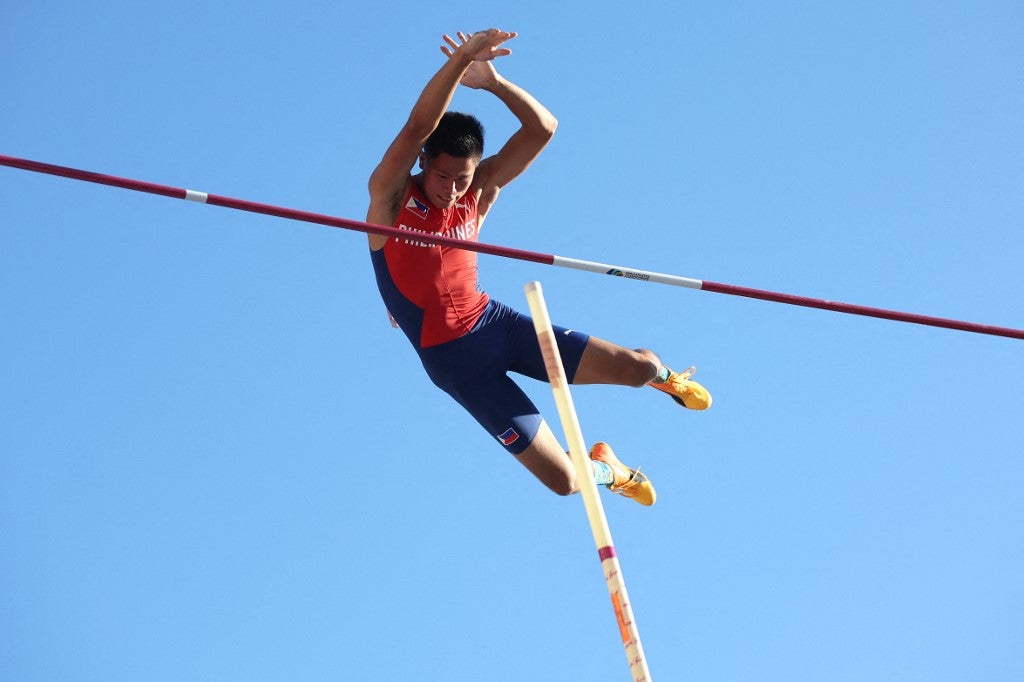 Ernest John Obiena of The Philippines competes in the Men’s Pole Vault final on day ten of the World Athletics Championships Oregon22 at Hayward Field on July 24, 2022 in Eugene, Oregon. Christian Petersen/Getty Images/AFP

Earning the applause of an adoring crowd, Ernest John Obiena stretched his triumphant streak in Germany that more than justified the recognition he got from the country’s lawmakers.

Prior to his victorious jump, the House of Representatives adopted a House resolution honoring the recent exploits of the world’s No. 3 vaulter.

House Resolution No. 317 commended Obiena for claiming gold medals in the 26th Internationales Stabhochsprung Meeting in Jockgrim on Aug. 23 and the True Athletes Classic 2022 on Aug. 28 in Leverkusen, both in Germany.

At Wendel City in front of a full-packed outdoor throng, the Asian record holder reset the competition record of 5.71 meters with a 5.86m effort, which proved enough to merit another mint straight into Obiena’s gold collection.

“Back to back (victories in a week). My third attempt on opening height made this competition even more breathtaking. As always the competition atmosphere was amazing and thank you for having me,” said Obiena, who went atop the medal podium thrice in his last four competitions.

Menno Vloon of the Netherlands placed second and Under-20 world champion Anthony Ammirati of France wound up third, both of them clearing 5.81m.

Obiena again zoomed in to break his personal best and Asian standard of 5.94m, but couldn’t hurdle six meters after three attempts.

The Tokyo Olympian established his record at the World Athletics Championships in Oregon last month where he won a historic bronze medal, the first podium finish for the country in global track and field.

“With his string of accomplishments, EJ’s feat is one of the greatest in Philippine athletics’ history, and underscored the kind of dizzying heights the country has achieved in pole vaulting,” the resolution said.

“He is set to compete again in various events, and with his hard work and determination to be the best male pole vaulter, success is within his reach,” added the resolution.

Obiena has three more competitions to hurdle with the Memorial van Damme in Brussels, Belgium on Friday followed by ISTAF Berlin on September 4 and the Golden Fly in Liechtenstein on September 11.