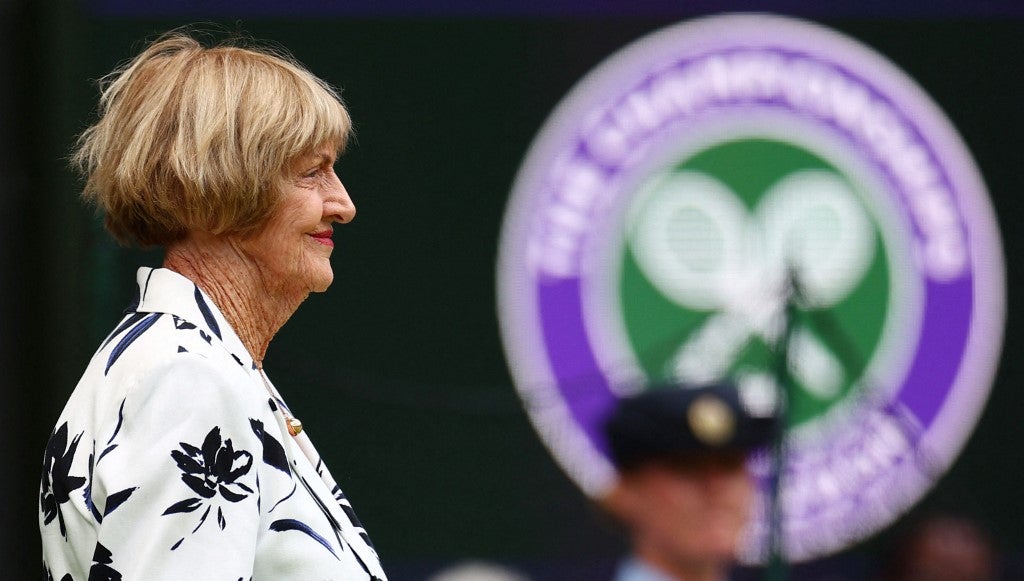 Australian retired tennis player and former world No. 1, Margaret Court, takes part in the Centre Court Centenary Ceremony, on the seventh day of the 2022 Wimbledon Championships at The All England Tennis Club in Wimbledon on July 3, 2022. (Photo by Adrian DENNIS / AFP)

While she didn’t say the word “retired,” Serena Williams’ career presumably ended Friday with a loss in the third round at the U.S. Open, with 23 Grand Slam titles to her name. Rafael Nadal is pursuing his 23rd this week in New York.

But Court, 80, in an interview with the Daily Telegraph, said she doesn’t get the respect she deserves from the tennis community at large or from Williams. The Australian said Rod Laver, her contemporary and countrymate who won 11 Grand Slam events, is celebrated while she isn’t.

For that, she concedes it’s because of her conservative beliefs about social issues, such as her opposition to same-sex marriage.

She said she attended Wimbledon this year, and no one spoke to her. She said her name only comes up in the context of Williams’ chase of her record 24 titles.

“It’s only when they have to, because I still hold so many records. In 2020, I was meant to be coming to Wimbledon for the 50th anniversary of my calendar Grand Slam. But then COVID hit, so the honor never happened,” Court said.

“The French Open didn’t invite me, the U.S. Open didn’t invite me. Rod Laver had won the Slam and I was going to be honored in the same way, but no. I didn’t lose any sleep over it. But the honor has not been there for what I did do. In my own nation, I have been given titles, but they would still rather not mention me.” Plus, Court said, the years she played were more difficult on competitors.

“We didn’t have psychologists or coaches with us. It’s a whole different world. That’s what disappoints me — that players today don’t honor the past of the game.”

Court, in the interview, called out Williams.

“Serena, I’ve admired her as a player,” Court said. “But I don’t think she has ever admired me.”

Williams said she is leaving tennis, in part, to expand her family. Her daughter, Olympia, turned 5 last week and was born after Williams won her final Grand Slam.

“I came back after two babies,” Court said. “After having the first baby, I won three out of the four Slams. Serena hasn’t won a Slam since.”