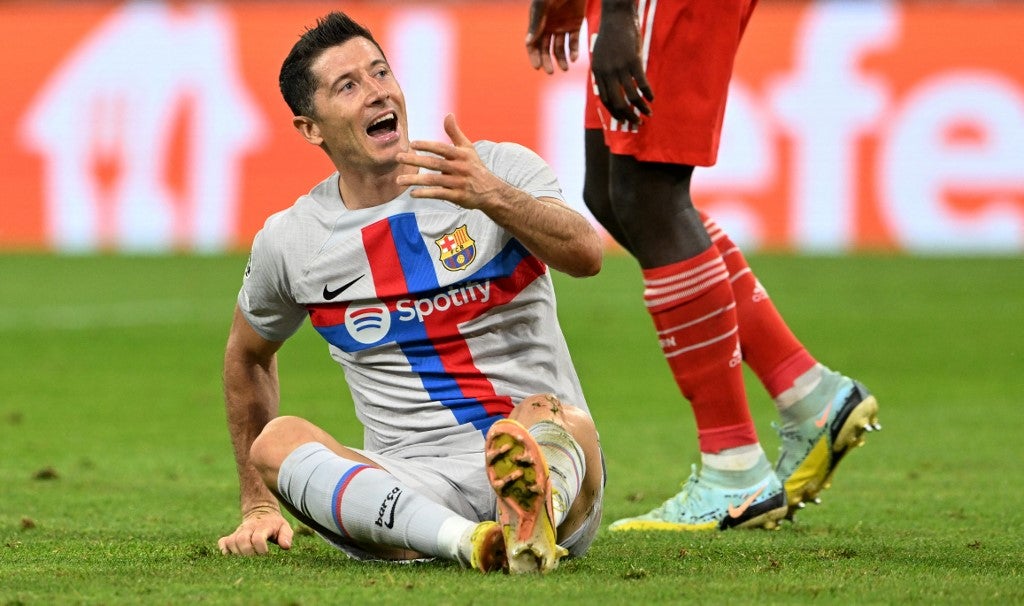 MUNICH, Germany-Bayern Munich scored twice in four minutes against the run of play, through Lucas Hernandez and Leroy Sane, to beat Barcelona 2-0 in their Champions League Group C match on Tuesday.

It was an unhappy return to Munich for Barca striker Robert Lewandowski, the Bavarians’ second-highest all-time scorer who left in the summer after eight years, with the Germans now top of their group on six points from two matches.

For Bayern the win could not have come at a better time, following three consecutive draws in the Bundesliga.

“Barca had the better chances in the first half. We had to rely on (keeper) Manuel (Neuer),” Bayern coach Julian Nagelsmann said. “After the break, we were more aggressive. We quickly scored two goals. We basically won because of higher efficiency.

“From our side I am also happy Lewandowski did not score against us tonight,” Nagelsmann added.

Barcelona are on three points, along with Inter. Viktoria Plzen are in last place.

Barca enjoyed a dream start, boxing the Germans in their own half with relentless pressing and carving out several early scoring chances.

Pedri’s shot was blocked by Neuer before Lewandowski fired a volley over the bar in the 17th.

The Pole, who scored 344 goals for Bayern in 375 games, came close again four minutes later, heading on to Neuer from close range.

The visitors did not give Bayern a look-in during the first half, with a hard-working Barca backline double-teaming every Bayern player when they had possession, nipping any planned move in the bud.

“We made six or seven big goal chances but missed them and Bayern took their opportunity,” Barcelona coach Xavi said. “We competed, we played very well and had we scored it would have been a completely different match.

“This is the Champions League though, you need to compete and you try to avoid the marking error at the corner which let them go 1-0 up.”

After the break, Bayern brought on Leon Goretzka and scored against the run of play with Hernandez beating keeper Marc Andre ter Stegen at the near post from a Joshua Kimmich corner.

Bayern doubled their lead four minutes later when Sane charged into the box and slipped the ball past Ter Stegen after combining with Jamal Musiala.

Pedri hit the post in the 63rd as Barca tried to bounce back but the Germans comfortably held on to get the three points and offer Nagelsmann some relief following their run of draws in the Bundesliga that saw them drop to third place.

They host Czech side Plzen in the Champions League on October 4.