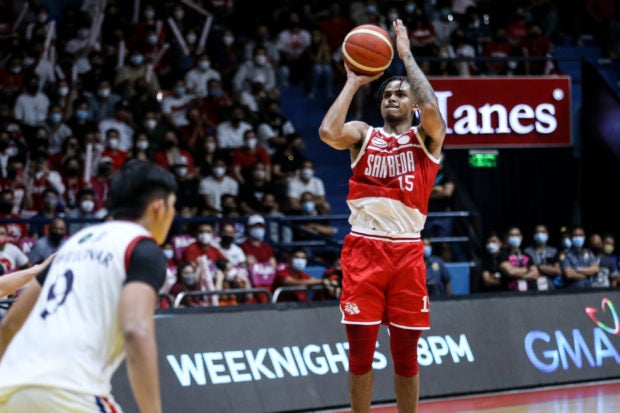 A week ago, San Beda was just trying to keep itself in the top half of the leaderboard in the NCAA men’s basketball tournament.

But after its loss to Mapua was reversed and a gritty win over two-time defending champion Letran came on the same day, the Red Lions are now on the prowl and will be gunning for a share of the lead having all the momentum on their side against Jose Rizal University (JRU) on Tuesday at Filoil EcoOil Centre.

With a 4-1 record, the Lions can make it a three-way tie for the early lead with a win in their 12 noon clash with the Heavy Bombers even as Perpetual Help seeks to keep Emilio Aguinaldo College winless in the 3 p.m. contest.

College of St. Benilde and Lyceum remain tied for the early lead.

“We have to be smart against JRU,” said San Beda coach Yuri Escueta, whose charges made the most out of the absence of two key Letran stars in a 76-68 win on Friday last week, just hours after they learned that an opening day loss to Mapua was turned into a win after the Cardinals were found to have fielded an ineligible player.

Escueta answered that way because Jose Rizal has been one of the more physical teams here.

The Bombers, though, won’t be easy pickings as they will come into the match seeking to stretch a three-game winning streak that came after two consecutive losses.

Coach Louie Gonzales is happy how his team has been performing of late, but notes that he would need to get the most out of his entire bench if Jose Rizal is to go deep this season.

“I think my first eight is playing well,” Gonzales said in Filipino. “But eight men won’t cut it. I need to have my entire 15-man roster ready to contribute.”