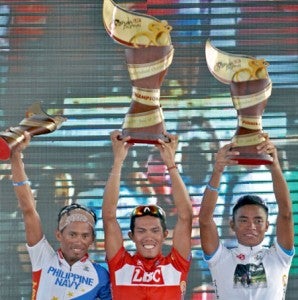 MARK Galedo used to listen ardently to conversations about heroic men who ruled back-breaking bikathons in the past. Now he’s a prominent figure when that topic comes up among sports buffs.

Flashing a wide grin, Galedo crossed the finish line of the Ronda Pilipinas on Roxas Boulevard yesterday as champion of cycling’s showpiece event, even as track specialist Alfie Catalan ruled the 15th and final stage to wind up as the winningest rider with three lap victories.

Clad in the red jersey that he had worn for a week as overall leader, the soft-spoken rider from Caloocan City embraced his mother, Eleonor, and exchanged high fives with his Road Bike teammates, supporters and even rivals.

“I heard many criticisms before the Ronda started and I am thankful for those comments—they kept me motivated,” said Galedo, the 2009 Tour of Luzon champion, in Filipino.

He picked up P1 million for skillfully protecting his 33-second lead over Irish Valenzuela after the two crucial mountain-climbing stages in Baguio. He also joined the exclusive list of riders with two Tour victories.

Valenzuela, who again ruled Ronda’s king of the mountain challenge, settled for P500,000 as runner-up, the same finish of his LPGMA-American Vinyl squad, which lost the team title, also worth P1 million, to Nueva Ecija.

Philippine Navy/Standard Insurance placed third, 13:25 off the team champion, at the end of one of the most exciting bikathons that was flagged off in Mindanao, passed through the eastern portion of the Visayas and traveled up north on Luzon over a period of 21 days.

“It’s an honor to be with them (Tour greats),” said Galedo, who raked in a total of P1,138,400 in earnings. He said a huge portion of his prize will go to his maintaining his bike shop in Mandaluyong and for his wedding with girlfriend, Gina Alon, in December.

Galedo, who changed his surname from Guevarra to Galedo after his father abandoned the family, withstood Valenzuela’s late surge in the Baguio stages.

Valenzuela made a series of attacks in Stage 12 from Lingayen, Pangasinan, to Baguio but couldn’t shake off Galedo. Valenzuela again made a bold move in the individual time trial the following day to no avail.

Galedo all but wrapped up the overall title by merely keeping pace with Valenzuela in the flatlands in Stage 14 from San Fernando, La Union to Tarlac City on Saturday.

Antonio Arzala and Barnachea, the only three-time champions in the Tour, will be Galedo’s motivation in the third Ronda Pilipinas tentatively scheduled January next year. “I want to join them, too,” said Galedo.