What happened in Vegas did not stay in Vegas 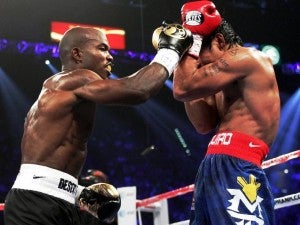 The ‘victory’ viewed around the world. Top Rank Photo

“Ring announcer Michael Buffer could not believe what he saw on the results sheet,” nursing assistant Elsa Mole from Connecticut excitedly recounted her story to The FilAm. “He was hesitant to announce Timothy Bradley as the WBO welterweight champion.”

Mole was among the thousands who watched the Pacquiao-Bradley match June 9 in Las Vegas. She was among the witnesses to one of boxing’s darkest hours when the world saw how alleged corruption may have decided the results of a well-fought game. On that day, Manny Pacquiao lost to Bradley in a split decision, but the Compubox that held the official scores as well boxing journalists’ own tally sheets showed Pacquiao was the clear winner.

Although there were about 20,000 people inside MGM Grand Arena, “you could hear a pin drop,” Mole said, right before the announcement was made. And when Buffer finally uttered Bradley’s name, champion boxer Pacquiao was not the only one who looked shocked. He and Bradley shook their heads in disbelief.

The crowd went from being shocked to furious. Everyone was booing and screaming, “No, it’s not fair, we’ve been robbed.” The booing reverberated throughout the arena, she said. “Lahat — puti, itim,

Latino, kampi lahat kay Manny.” People stayed after the announcement for almost an hour wondering about what just happened.

During the thanksgiving mass on Sunday, the day after the fight, Pacquiao thanked everyone for supporting him:

At the mass, the Sarangani congressman was approached by many of his well-wishers telling him, “Manny, hindi ka natalo, dinaya ka at dinaya tayo.”

Many Filipinos believe the two judges (who voted for Bradley) have a lot of explaining to do.

“They should be investigated and then banned for life,” said photographer Luis Gata. “They are a disgrace to boxing.”

“Conspiracy theories aside, maybe the two judges were looking for a KO from Pacquiao which he hasn’t done since Cotto in 2009,” said Fordham student Michael Alberto. “But still those judges need to be

For ‘Filipino Reporter’ sports editor L.P. Pelayo: “I believe the judges saw that Manny wasn’t too busy enough in the later rounds of the fight. Nevertheless, the numbers don’t lie and Manny had not only

the higher percentage but power punch connects as well.”

“Given the profit-driven corrupt and cheats history of boxing, from tampered gloves to mafia-style match fixing. I won’t be surprised if something of this nature occurred,” said youth activist Chevy

Still, music producer Carl Cruz is convinced that Pacquiao was aware of what was going on.

“I say it’s back to the old school Las Vegas where someone behind the fighter is pulling the strings and deciding who is to win,” he said.