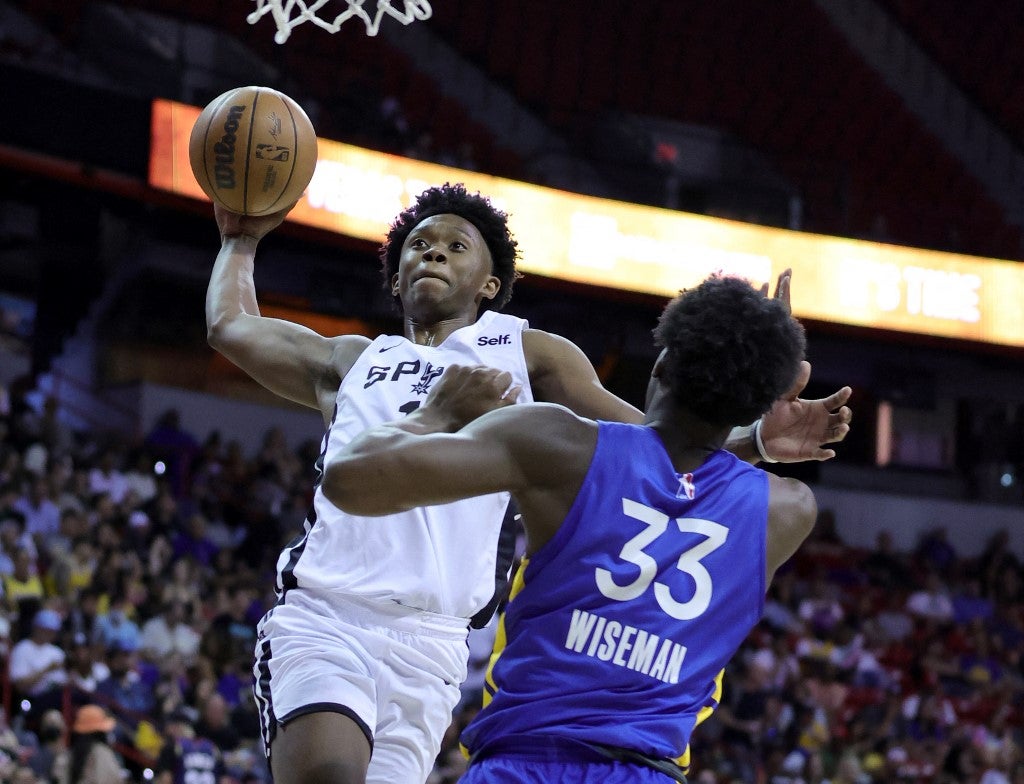 Joshua Primo #11 of the San Antonio Spurs is fouled as he attempts a dunk against James Wiseman #33 of the Golden State Warriors during the 2022 NBA Summer League at the Thomas & Mack Center on July 10, 2022 in Las Vegas, Nevada. Ethan Miller/Getty Images/AFP

Primo was suddenly released by the Spurs on Friday night, which prompted curiosity over what could have led to such a move.

It was ESPN that initially reported that Primo’s release was due to him exposing himself to multiple women.

The Athletic later reported that a former female Spurs employee alleged Primo exposed himself to her. That woman has hired Tony Buzbee, the attorney that represented numerous women in sexual misconduct lawsuits against NFL quarterback Deshaun Watson.

“It is our hope that, in the long run, this decision will serve the best interest of both the organization and Joshua,” Spurs chief executive officer RC Buford said.

Primo issued a statement to ESPN on Friday, expressing that he was struggling with his mental health.

“I know that you all are surprised by today’s announcement,” Primo said. “I’ve been seeking help to deal with previous trauma I suffered and will now take this time to focus on my mental health treatment more fully. I hope to be able to discuss these issues in the future so I can help others who have suffered in a similar way. I appreciate privacy at this time.”

Earlier this month, San Antonio exercised a third-year team option on Primo’s rookie contract that would have kept him on the team through 2023-24.

Primo played in four games this season and averaged 7.0 points, 4.5 assists and 3.3 rebounds. Before being waived, he was on the team’s injury report, listed as having left glute soreness.

Primo is a native of Toronto.