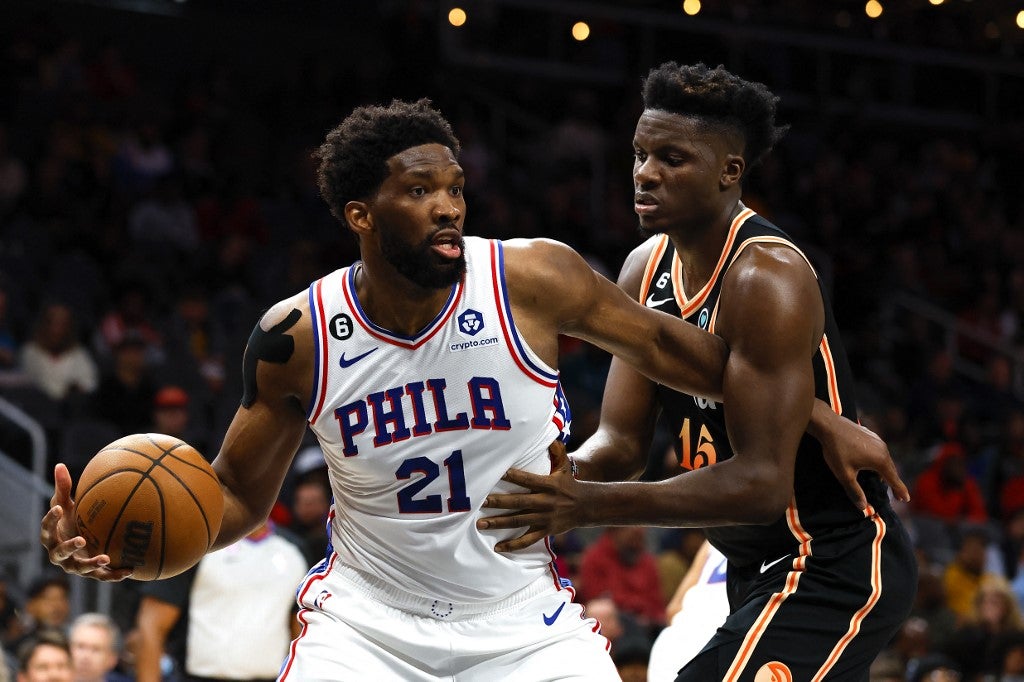 Joel Embiid #21 of the Philadelphia 76ers battles Clint Capela #15 of the Atlanta Hawks during the second half at State Farm Arena on November 10, 2022 in Atlanta, Georgia. Todd Kirkland/Getty Images/AFP

Joel Embiid scored a season-high 42 points and grabbed 10 rebounds as the Philadelphia 76ers withstood a second-half charge by the visiting Atlanta Hawks for a 121-109 victory on Saturday.

Tyrese Maxey had 26 points and nine assists, Tobias Harris scored 21 points and Shake Milton had 11 for Philadelphia, which avenged a 104-95 loss to the Hawks on Thursday in Atlanta.

Atlanta trailed by as many as 27 points midway through the third quarter before closing on a 22-10 run to cut the deficit to 99-84.

The Hawks carried their momentum into the fourth quarter and pulled within 113-107 on AJ Griffin’s 3-pointer with 2:28 remaining.

Embiid set the tone early with a dominant first quarter, scoring 14 points with four rebounds and three assists to give the Sixers 37-24 lead.

a season-high in points for @JoelEmbiid!

Philadelphia maintained its double-digit lead throughout the second quarter and moved ahead 53-35 on Maxey’s trey with 6:36 left in the half.

Maxey snapped out of a mini-slump after shooting 29.7 percent from the field in his last three games. The third-year point guard was 10 of 18 shooting against Atlanta, including 3 of 5 from 3-point range.

Philadelphia took a 67-51 lead into the break after shooting 56.8 percent from the field. Embiid had 18 points in the half to lead all scorers.

Sixers guard De’Anthony Melton missed the game with a back injury, while reserve guard Furkan Korkmaz scored seven points before exiting in the second quarter with a left knee injury.

Embiid finished with six assists and two blocks in 40 minutes while shooting 14 of 25 from the field and 13 of 16 from the foul line.

Atlanta forward Onyeka Okongwu, who recorded a double-double in Thursday’s win over Philadelphia, missed the game due to personal reasons.