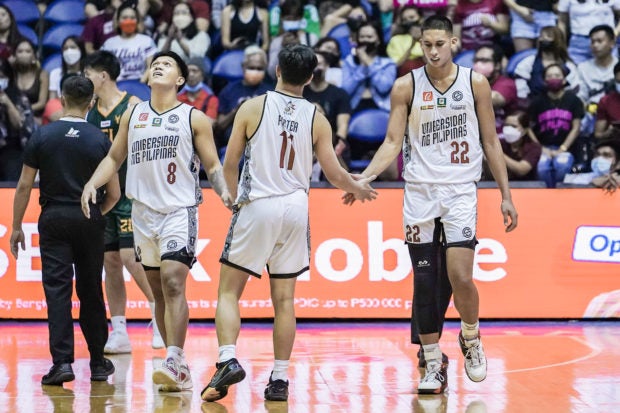 At about an hour past noon last Nov. 5, University of the Philippines (UP) walked off the Smart Araneta Coliseum court with an 83-69 rout of University of the East. More than six hours later, the Maroons plunged into a 12-day break with a Final Four slot in the UAAP men’s basketball tournament clinched—and they didn’t even have to break a sweat.

Ateneo did the heavy lifting for them, with a 68-54 victory guaranteeing that UP will be in the semifinals no matter how the rest of the second round pans out.

That gave the defending champions the luxury of focusing purely on themselves at the resumption of their bid for a second straight crown on Wednesday opposite the Far Eastern University Tamaraws at the Big Dome.

“The biggest thing for our team is making sure we are well-oiled and ready to go within ourselves,’’ said forward Zavier Lucero, who has formed a tough low-post tandem with center Malick Diouf. “It doesn’t matter [who is] on the other side of the court … we’ll be good in trying to kill every team out there.”

The ability to put on a sustained performance regardless of the opponent could prove valuable for UP, which faces a roller-coaster schedule to end the second round.

The Maroons will be overwhelming favorites against the resurgent Tamaraws, but then face dangerous La Salle next. They then battle also-ran University of Santo Tomas before closing out the elimination round against last season’s Finals rival Ateneo.

With only a single defeat in 10 outings, UP’s next goal should be keeping its current nook in the standings to collect a twice-to-beat bonus heading into the Final Four.

Except that UP head coach Goldwyn Monteverde wants his players to quit checking the standings.

“We don’t want to be comfortable and we’re not really into our standings. I guess what’s important is how we finish the game,’’ said Monteverde, whose wards benefited from the 12-day break the UAAP took to give way to the country’s participation in the Fiba (International Basketball Federation) World Cup Asian qualifiers.

“We continue to work hard and look at what needs to be improved on and definitely there are a lot of things we have to do. Everybody is really committed to the process of building the team, and that has been our mindset ever since,’’ said Monteverde.

Running second and settled two games behind the Maroons, the Bulldogs (7-3) are coming off wins over the Blue Eagles and the Tamaraws, the momentum of which they intend to sustain against the Warriors (4-6) in the second game of a heavy four-game schedule.

“It’s a two-win streak and we worked hard in practice during the break. Ours is a 16-man strong team, everybody can step up if needed. We have the pieces willing to sacrifice for the sake of the team and that’s what we are bringing into this game,’’ said National University coach Jeff Napa.