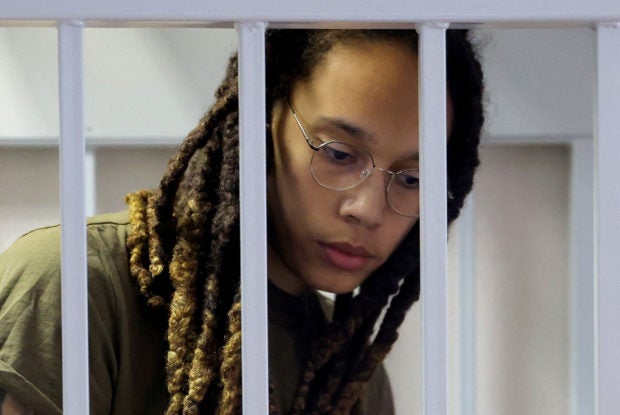 US basketball player Brittney Griner, who was detained at Moscow’s Sheremetyevo airport and later charged with illegal possession of cannabis, looks on inside a defendants’ cage before a court hearing in Khimki outside Moscow, Russia August 2, 2022. REUTERS/Evgenia Novozhenina/Pool

WNBA star Brittney Griner has been transferred to a penal colony to serve the remainder of her nine-year sentence following her conviction for bringing drugs into Russia.

Her lawyers confirmed Thursday that the Phoenix Mercury center is at a penal colony in Yavas in the Republic of Mordovia, about 310 miles southeast of Moscow.

“First, on behalf of Brittney, we would like to thank everyone who has expressed care for her,” her lawyers, Maria Blagovolina and Alexander Boykov, said in a statement, per CNN. “We can confirm that Brittney began serving her sentence at IK-2 in Mordovia.

“We visited her early this week. Brittney is doing as well as could be expected and trying to stay strong as she adapts to a new environment. Considering that this is a very challenging period for her, there will be no further comments from us.”

On Wednesday, the US State Department said it has not received official notification of the move, which reportedly occurred November 4. A spokesperson said the embassy in Russia had “continued to press for more information about her transfer and current location.”

A 2021 report from the State Department about human rights in Russia said prisoners in penal colonies have been subjected to harsh conditions such as torture, solitary confinement or banishment to psychiatric units. Forced labor is allowed while prisoners are detained.

The Biden administration and the Richardson Center for Global Engagement have been engaged in efforts to free Griner, 32, as well as a fellow American detainee, Paul Whelan. He also is being held in Mordovia to serve a 16-year sentence after being convicted on espionage charges, which he has denied.

The Biden administration considers both Griner and Whelan to be wrongly detained.

Griner appealed her sentence, which the Russian courts upheld last month. She was taken into custody at an airport near Moscow in February when officials found vape cartridges containing cannabis. Griner said she didn’t intend to transport the drug as she hurriedly packed to return to her offseason basketball team.