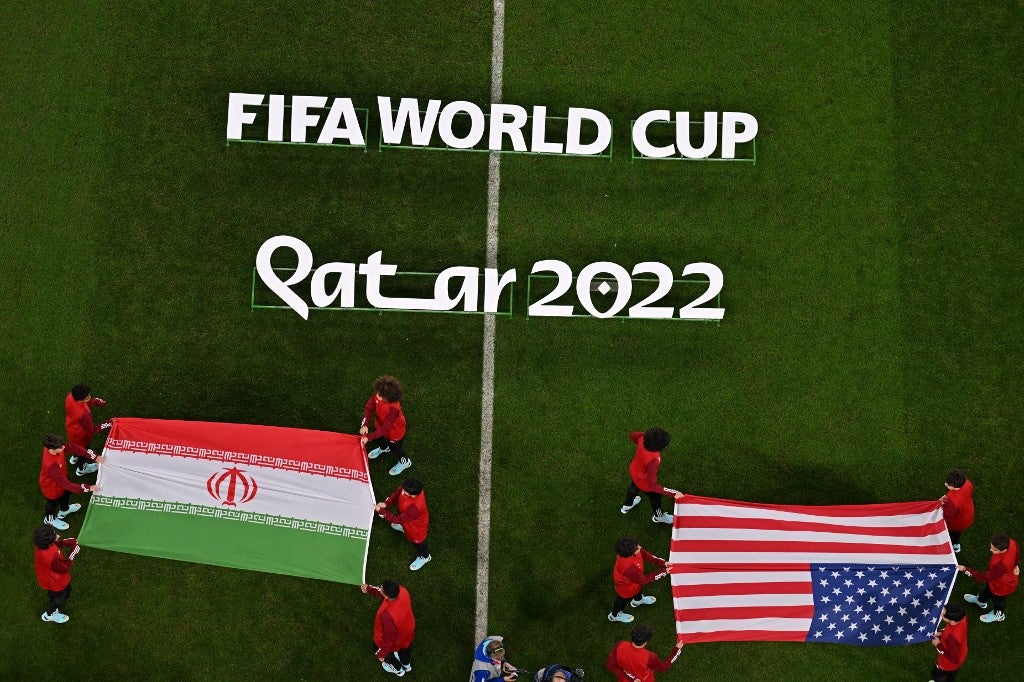 FILE–The flags of Iran and USA are displayed during the Qatar 2022 World Cup Group B football match between Iran and USA at the Al-Thumama Stadium in Doha on November 29, 2022. (Photo by Kirill KUDRYAVTSEV / AFP)

Iran said on Thursday it had opened an investigation into the death of a man who was shot while celebrating Iran’s World Cup defeat to arch-enemy the United States.

The loss eliminated Iran’s national football team from the tournament in Qatar on Tuesday night, drawing a mixed response from pro- and anti-government supporters.

“An investigation has been opened and a local prosecutor has been assigned to the case,” he added.

Human rights groups based abroad said Samak, 27, had been shot dead by Iranian security forces after honking his car horn during celebrations that followed Iran’s loss to the United States.

The result sparked both scenes of joy and despair among Iranians in a country divided by protests that flared over the September 16 death in custody of Mahsa Amini.

The 22-year-old, an Iranian of Kurdish origin, died three days after falling into a coma following her arrest for an alleged breach of the Islamic republic’s dress code for women.

The head of the Islamic Revolutionary Guard Corps, Major General Hossein Salami, said on Thursday Iran’s enemies had influenced youths who were happy with the football result.

“Today, they (the enemies) are all trying to sow the seeds of despair in the hearts of young people and some of them even showed their satisfaction afterwards and that they are happy with the elimination of the national football team,” he said.

“We must take measures to serve the people, because poverty and misery are also among the enemies of the country,” Salami said, according to the official news agency IRNA.

An Iranian general said on Monday that more than 300 people have been killed in the unrest sparked by Amini’s death.

Oslo-based non-governmental organization Iran Human Rights said on Tuesday that at least 448 people had been “killed by security forces in the ongoing nationwide protests”.