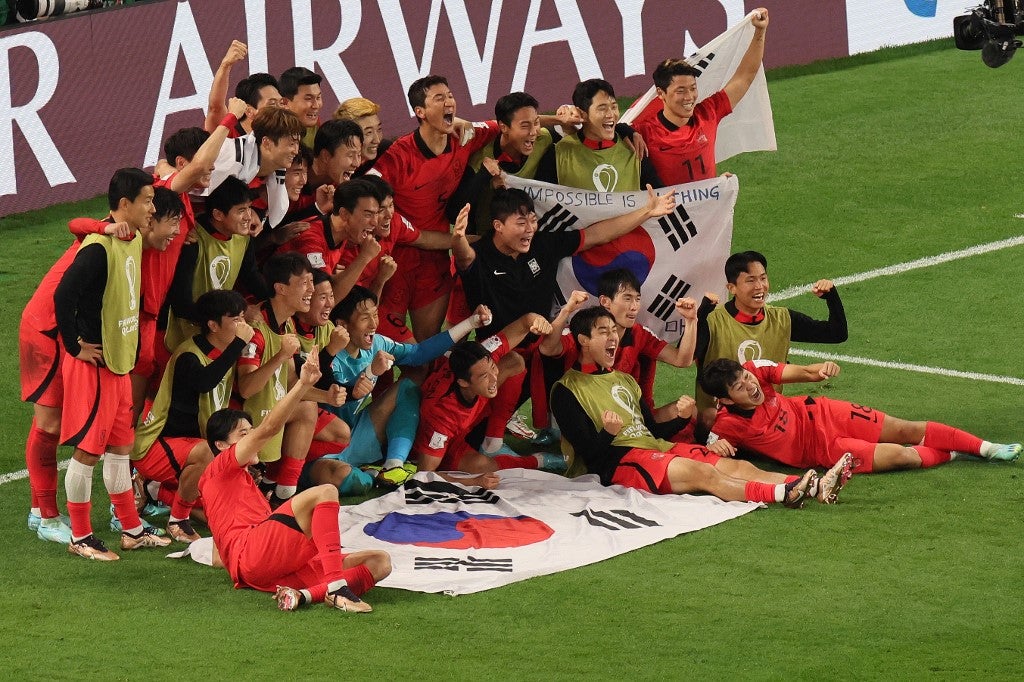 With the clock ticking down at Education City Stadium, the Koreans knew they needed one more goal to leapfrog the South Americans and Hwang Hee-chan delivered to secure a 2-1 victory.

The Korean players stood in a huddle watching the final minutes of the Ghana v Uruguay match on a mobile phone as they waited for their place in the last 16 to be confirmed.

Uruguay, leading 2-0, needed one more goal to go through but fell agonizingly short despite piling on the pressure.

Uruguay and South Korea ended the group phase level on four points and with an identical goal difference but crucially the Koreans had scored two more goals, which meant they finished second in Group H behind Portugal.

Tottenham forward Son Heung-min, who produced a brilliant assist for the winner, said he was crying “tears of happiness”.

“We waited really long for this moment and we as players believed altogether we could do this,” he said.

Ricardo Horta had given Portugal an early lead at Education City Stadium, only for Kim Young-gwon to hit back in the 27th minute, giving them fresh hope. The game between Uruguay and Ghana was billed as a chance for the African side to avenge their defeat by the South Americans at the 2010 World Cup, where Luis Suarez was the villain of the piece.

A deliberate handball on the goalline by Suarez denied Ghana an extra-time winner in their quarter-final in South Africa.

Suarez, 35, who had brushed off an invitation to apologize for his misdeeds before the game, had a major role in his team’s goals, both scored by Giorgian de Arrascaeta, but it was not enough.

Suarez, who was replaced by Edinson Cavani in the second half, was inconsolable after the defeat and furious Uruguay players surrounded the officials, incensed that they had not been awarded a penalty.

“We had several chances to score the third goal (which would have put Uruguay through),” said Uruguay coach Diego Alonso.

“For 80 minutes we were qualified and we had lots of chances, but in the end it wasn’t possible.”

In Group G, already-qualified Brazil plays Cameroon, who must win to stand a chance of progressing.

Serbia must also beat Switzerland — who would likely qualify with a draw — to reach the last 16.

On Thursday, Japan beat 2010 world champions Spain to seal its place in the knockout rounds at the expense of four-time World Cup winner Germany, with the Spaniards also qualifying.

Germany, which suffered a stunning 2-1 defeat to the Japanese earlier in the tournament, was eliminated on goal difference despite beating Costa Rica.

It is the second straight World Cup in which Germany has failed to go beyond the group stage, a startling fall from grace for the country which last won the title in 2014.

The German exit has put the future of coach Hansi Flick under scrutiny.

German Football Federation (DFB) president Bernd Neuendorf said there was no question of Flick being granted a “blank cheque” to continue as he announced a review of the debacle.