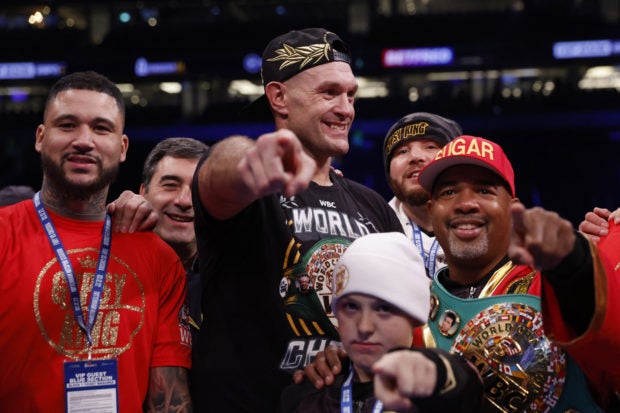 LONDON—Britain’s Tyson Fury roared out a challenge to rival heavyweight world champion Oleksandr Usyk of Ukraine after retaining his WBC title with a savage 10th round stoppage of compatriot Derek Chisora on Saturday.

The ‘Gypsy King’ had threatened ‘carnage’ in the ring and he dominated from the opening bell, with Chisora repeatedly on the ropes and taking some punishing blows from his taller and heavier opponent.

Fury was popping in the jabs freely in the second round, with Chisora unsteady on his legs in the third when both fighters tumbled accidentally to the canvas.

Chisora’s right eye began to close up from the seventh, the challenger receiving attention in his corner at the end of the following rounds as the fight became a race between a stoppage and a knockout.

Chisora’s long-time trainer Don Charles was not about to throw in the towel, however, and it needed referee Victor Loughlin to step in — the Scot finally waving a halt with 10 seconds remaining in the 10th of the 12 scheduled rounds.

Fury, 34, took his unbeaten professional record to 33 wins and a draw as Chisora, 38, suffered a fourth defeat in his last five fights and 13th in 46 career bouts.

The champion also beat Chisora comfortably in their previous encounters in London in 2014 and 2011 and Saturday was really a filler before a much bigger potential fight next year, probably in Saudi Arabia.

“Where’s Oleksandr Usyk, the rabbit?,” Fury roared at the crowd.

The Briton then went face to face with the Ukrainian, the WBA, IBF, WBO and IBO champion who had been watching from ringside and was booed by the crowd when his face appeared on the big screen.

“Me and you … I’m going to write you off. I’ve already done one Ukrainian (Wladimir) Klitschko and I’ll do you as well. You ugly little man. Let’s get it on.”

Usyk smiled, saying nothing in reply.

The war of words was in sharp contrast with Fury’s respect for his beaten friend, the pair touching gloves at the end of the eighth after another bruising round with Chisora again on the ropes and punched at will.

“I needed some rounds,” said Fury, whose last fight was a sixth-round stoppage of compatriot Dillian Whyte at Wembley in April. He had announced his retirement then but could not stay away for long.

“I felt good in there tonight, I was landing my jab and landed some good punches. I take nothing away from Del Boy ‘War’ Chisora. He’s an absolute warrior and it’s been a privilege to fight him three times,” he said.

“We’ve had three epic fights and what a tough man. I was hitting him with shots there that would knock anybody else spark out and he stood up to every one of them.”

Chisora thanked the referee for taking matters into his own hands. “As a fighter you don’t want to stop,” he said.

Triumphant Usyk says he has only Fury in his sights now