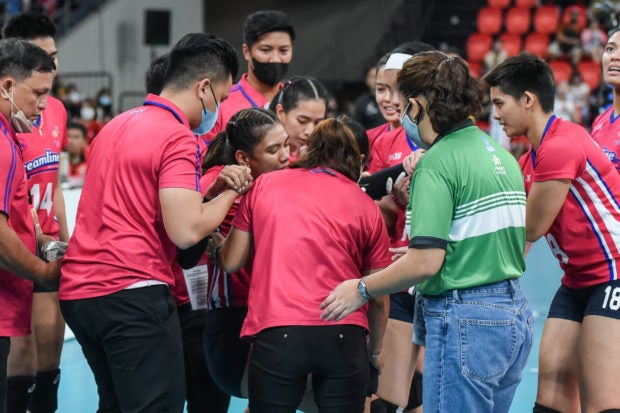 Alyssa Valdez helped to the bench after hurting her right knee in the bronze medal clincher. –PVL PHOTO

MANILA, Philippines — Creamline is holding its breath as Alyssa Valdez is set to undergo an MRI right after the team copped the bronze medal in the 2022 Premier Volleyball League Reinforced Conference on Tuesday at Philsports Arena.

Tournament Director Tonyboy Liao bared to the reporters that Valdez went to Makati Medical Center after she hurt her right knee in Creamline’s 25-15, 25-19, 23-25, 25-21 victory over Chery Tiggo to complete a sweep of the bronze medal series.

The three-time PVL MVP’s right knee hit the floor hard while going for a dig when Creamline was leading 6-3 in the third. She was carried off the court by her teammates and coaching staff and was ruled out of the match with 10 points. Rose Vargas was fielded for Valdez.

Valdez was offered to go the hospital right away but opted to stay and support her teammates from the bench while her knee was wrapped in ice. She was able to walk with a knee immobilizer after the game.

Coach Sherwin Meneses said they’re hoping for the best as they will get the results of her MRI either Tuesday evening or Wednesday.

WATCH: Alyssa Valdez hurt her right knee while going for a dig. She was carried off the court in the third set. Creamline leads, 6-3. | @LanceAgcaoilINQ pic.twitter.com/Yox2gYXBMT

(We don’t know yet. We can’t answer that right now. Maybe we’ll learn it later or tomorrow. But I saw her walking after the game. Hopefully, it’s not a serious injury.)

Tots Carlos admitted they missed the presence of their team captain inside the court but everyone from their team  was ready to step up. The two-time MVP led the all-Filipino Creamline with Yeliz Basa sitting out due to a nagging injury as she erupted for 19 points to give her team a bronze medal after a shattered Grand Slam bid.

“Alyssa has a huge impact on us even when it comes to cheering us, in terms of setting the mood and lifting up our morale. But like what coach said, whoever enters the court should be ready because we go through the same training, same drills, and same system. When we lose a player, another one will step up,” said Carlos in Filipino.