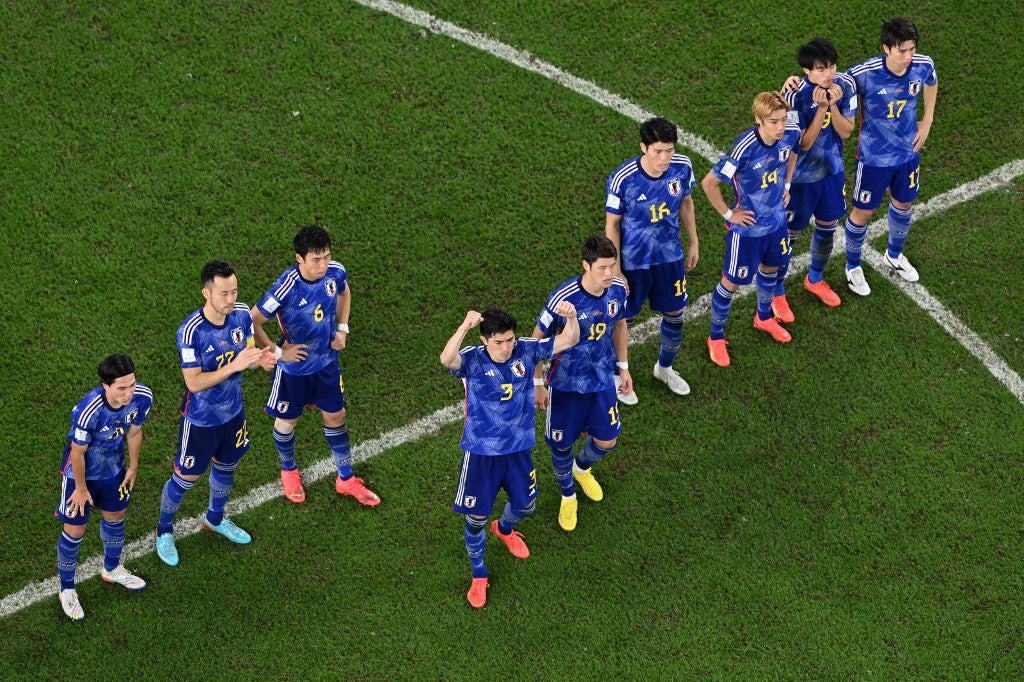 Japan’s players celebrate during one of the penalty shoot-out in the Qatar 2022 World Cup round of 16 football match between Japan and Croatia at the Al-Janoub Stadium in Al-Wakrah, south of Doha on December 5, 2022. (Photo by François-Xavier MARIT / AFP)

Japan will put their World Cup heartbreak behind them and focus on becoming Asian champions for a fifth time, captain Maya Yoshida said after the team returned home on Wednesday.

The Blue Samurai were eliminated from the World Cup on penalties by Croatia in the last 16 on Monday, denying them a first-ever place in the quarter-finals.

But the defeat did not stop hundreds of fans from traveling to an airport near Tokyo to welcome the players and coach Hajime Moriyasu back from Qatar.

“We won’t stop here,” Yoshida said at a news conference after arriving.

“We will aim to become the best in Asia,” he added.

“Our fight will continue. As long as we keep playing football, we must keep fighting.”

The Asian Cup will also be held in Qatar after original host China dropped out due to its strict anti-COVID policies.

The tournament was set to be held in June and July 2023 but is now likely to be postponed until early 2024 to avoid Qatar’s fierce summer heat.

Japan won the most recent of their four Asian Cup titles the last time Qatar hosted the tournament, in 2011.

The Blue Samurai could not find a way past Croatia in the last 16 of the World Cup, but they stunned former champions Germany and Spain to top their first-round group.

“We couldn’t reach new heights but my players showed us a new era, and this is just the beginning,” said Moriyasu.

Among the crowd of fans waiting to welcome the team home at the airport was 55-year-old Takamichi Masui.

He said the wins over Germany and Spain were proof that “Japan has become a soccer powerhouse”.

Another fan, 37-year-old Takahiro Ichikawa, said that like captain Yoshida, he is only looking ahead.

“For now, I hope the national team will focus on pulling off a solid performance in the Asian Cup in Qatar,” he said.