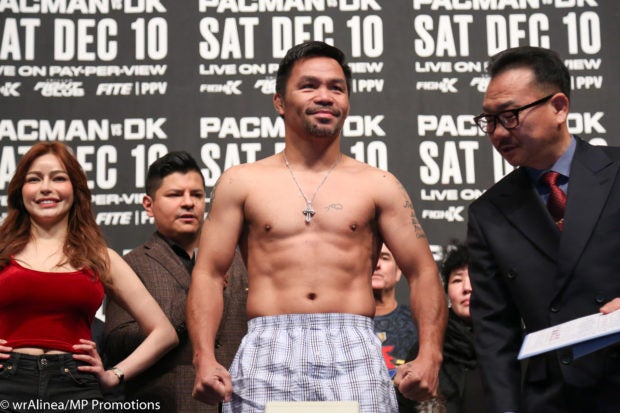 FILE–Manny Pacquiao during the weigh-in for his charity fight against South Korean YouTuber DK Yoo in Seoul, South Korea. Photo from Wendell Alinea

MANILA, Philippines — Manny Pacquiao is set to face a Japanese opponent this 2023 after he reached an agreement with mixed martial arts promotion Rizin Fighting Federation.

The Filipino boxing icon ended the year 2022 with a surprising announcement during his appearance with Japanese promotion president Nobuyuki Sakakibara in the Rizin 40 event at Saitama Super Arena.

“A few months ago, I was here as a guest, and I have a very exciting announcement tonight. I have agreed with Rizin to fight next year (2023),” said Pacquiao.

“The date will soon be announced and also my opponent that Rizin will choose. And I’m open and excited to fight a Japanese fighter. Thank you,” he added.

It is still unclear whether the 44-year-old will see action in an official match or another exhibition for Rizin, which has been organizing kickboxing and boxing fights.

Interestingly, Pacquiao’s rival, Floyd Mayweather Jr. also had exhibition bouts under Rizin in 2018 when he sent Tenshin Nasukawa to a first-round Technical Knockout and defeated Deji Olatunji also by TKO in the sixth round September last year.

The former senator announced his retirement ahead of his presidential bid last year but lost in the May 9 elections.

Pacquiao last fought in the professional scene, losing to Yordenis Ugas by unanimous decision in a WBA super welterweight title defense in August 2021.