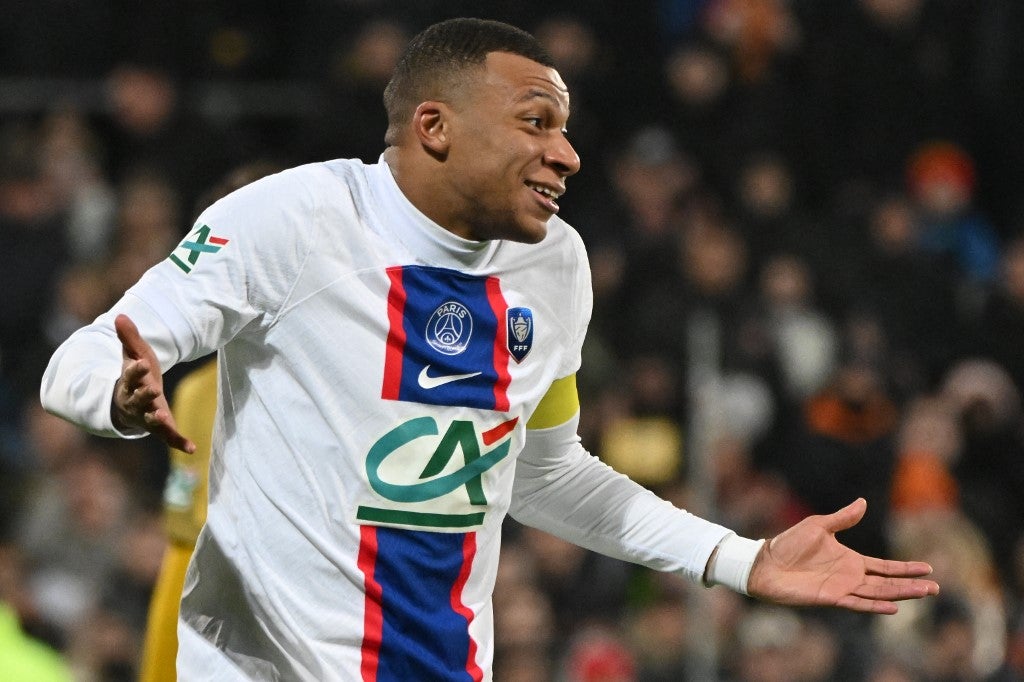 Paris Saint-Germain’s French forward Kylian Mbappe celebrates after scoring a goal during the French Cup round of 32 football match between US Pays de Cassel and Paris Saint-Germain (PSG) at the Bollaert-Delelis stadium in Lens, northern France on January 23, 2023. (Photo by Francois LO PRESTI / AFP)

Mbappe, who scored a hat-trick in France’s defeat by Argentina in the World Cup final just over a month ago, netted a hat-trick in the first half here as PSG led 4-0 at the break against their regional league opponents.

He struck twice more after the restart, with Neymar and Carlos Soler scoring PSG’s other goals in the last-32 tie.

The Qatar-owned club, who have won the French Cup 14 times, more than any other team, will now play away to bitter rivals Marseille in the last 16 early next month.

⚽️🖐@KMbappe is the first player in PSG history to score 5️⃣ goals in an official match! 🔴🔵 pic.twitter.com/OK7C1eIaOh

That match is scheduled for the week beginning February 6, just a week before PSG host Bayern Munich in the first leg of their Champions League last-16 tie.

“Once we scored the first goal it became harder for our opponents,” PSG boss Christophe Galtier told reporters.

“The opponents we’ll face over the next weeks are of a different quality,” he added.

Mbappe was given the captain’s armband while Neymar also started, but Lionel Messi was rested, allowed to sit out this tie played before a full house at the 38,000-seat Stade Bollaert-Delelis in Lens.

Pays de Cassel are a tiny club representing a handful of villages inland from the port town of Dunkirk in France’s far north, but their remarkable run to this stage of the tournament stoked the interest of the whole region.

They performed admirably in the early stages against the Ligue 1 leaders, but their resistance was broken just before the half-hour mark when Mbappe turned in a Nuno Mendes cutback, the ball taking a crucial deflection on its way in.

Mbappe then set up Neymar for the Brazilian to score his first goal since the World Cup, before the France star lobbed in his team’s third and then completed a 12-minute hat-trick from a Vitinha pass.

Mbappe’s fourth, and PSG’s fifth, followed a goalkeeping mistake in the 56th minute.

Neymar set up Soler to backheel in for 6-0 before Mbappe completed the rout, his fifth of the game allowing him to equal the all-time record for most French Cup goals.

He has now scored 29 times in the competition, as many as former Marseille great Jean-Pierre Papin.