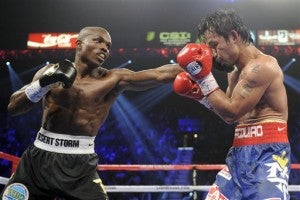 GENERAL SANTOS CITY, Philippines—Protestant pastors have been coming in droves to Manny Pacquiao’s mansion here. And their number is increasing each day.

One day, seven of them coming from different religious factions arrived. The next day, the number rose to 10. They take a bath, sleep and eat right there as if it is their own house.

They are forming to be the Achilles’ heel of the boxing icon. They follow him wherever he goes—from here to Baguio and even the United States.

They started stalking the Filipino ring idol after the Pacquiao-Marquez fight in November 2011, when the world’s eight-division boxing champ decided to change his lifestyle and began holding daily Bible study with his family, friends and supporters.

But there were just two or three pastors then attending the Bible study.

A source close to Pacquiao told the Philippine Daily Inquirer that these pastors have been abusing the man’s kindness and generosity.

“They are making our boxing idol a milking cow. The real Manny Pacquiao doesn’t know how to say no. But if they are real disciples of God, they should be ashamed of what they are doing,” the source said.

The source said that one pastor was given an iPad but seemingly not contented with what he got, he still asked for a new service vehicle. “Now, he is sporting a brand-new pickup, courtesy of Manny Pacquiao,” the source added.

Another pastor asked for cash, while still another abandoned his flock somewhere in northern Luzon just to be with the boxer-lawmaker.

Another pastor joined the Pacquiao team during the training camp in Los Angeles. “He asked for 36 tickets in the Pacquiao-Bradley fight. The guy got what he wanted,” the source said.

“I was the one so ashamed when he asked Manny Pacquiao to get eight hotel rooms for his family in the US,” the source added.

According to the Inquirer source, it was the first time that someone asked for 36 tickets and eight hotel rooms from the boxing champ.

When Pacquiao and his entourage arrived at the Ninoy Aquino International Airport (NAIA) on June 16, this same pastor was seen brandishing a big Louis Vuitton bag.

“Now, there are so many pastors. I want to be a pastor, too,” the source stated.

Another source has admitted being convinced that religion is the opium of the masses.  “And the preachers are the pushers,” the source added. “Before, we were expecting that these pastors would help or guide Manny Pacquiao towards the path of salvation. We didn’t expect that they would abuse his kindness and generosity.”

The poor, the source claimed, need Pacquiao’s help more than the pastors do. “The poor people are more deserving of such blessings. I hope, one day, they will realize their mistake and that they will stop asking any kind of favor from Pacquiao.”

The sources said the preachers have been planning a “grand religious concert” for Pacquiao at the Araneta coliseum on June 28.

“They assigned Manny Pacquaio as the main speaker. From what I’ve heard during the discussion, they wanted Pacquiao to settle all the bills before the staging of the concert,” the source disclosed.

However, according to the source, Pacquiao insisted that all the bills for the venue rental, catering, transportation, etc., be settled only after the concert.

“Of course, it can be read between the lines that someone is bound to make a killing out of this concert. This is a multimillion-peso event,” the source said.

The same sources further revealed that a rift has developed among Pacquiao’s political backers, boxing circle and the pastors.

“Manny Pacquiao tends to listen to these pastors more than to his advisers and friends from political and boxing circles,” one of the sources claimed.

Those from political and boxing circles, the source said, believed that Pacquiao’s involvement in religious activities has hurt his boxing career.

“The old Manny Pacquiao is gone. Atop the ring, he is no longer as ferocious as before. Unless he learns to temper his newfound passion and obsession, we would no longer see knock-out victories in his future fights,” the source averred.