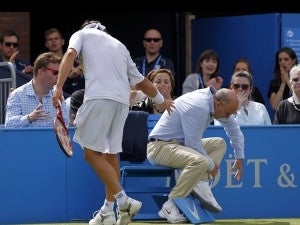 Argentina's David Nalbandian (left) reacts as he causes an injury to the line judge (right) for which he was disqualified during the Queen's Club grass court championships final tennis match against Croatia's Marin Cilic, London, Sunday, June 17, 2012. AP/Sang Tan

LONDON – David Nalbandian has escaped further punishment for his stormy disqualification from the Queen’s Club final where he injured a line judge after destroying an advertising hoarding.

The fiery Argentine was defaulted in the final against Marin Cilic last weekend for his controversial behavior which was followed by a tirade against the ATP who he accused of forcing players to perform on a dangerous, rain-soaked surface.

Nalbandian was fined but was also facing the prospect of a lengthy ban after already having been accused of throwing water at an official during the Australian Open.

“No further disciplinary action will be taken against David Nalbandian, who was defaulted last Sunday from the final Queen’s Club,” said an ATP statement.

“Nalbandian was sanctioned approximately $70,000 in prize money and fines, and 150 ranking points for unsportsmanlike conduct.”

“After a review of the incident, the ATP determined that although David’s actions were unacceptable and under ATP rules warranted an automatic default, the injury to the linesman was unintentional.”

“As such, it was decided that the sanctions already levied against David are sufficient in this case.”