Talk N’ Text exacts revenge and asserts its might over BMeg; Yap struggles 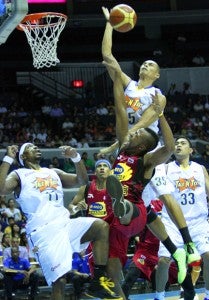 MANILA, Philippines—Not even BMeg, the same team who defeated them in the recent Philippine Cup finals, could stop Talk N’ Text.

The Texters sustained its hot streak and clobbered the Llamados, 89-72, Wednesday night and got a boost for the next round of the 2012 PBA Governor’s Cup at the Smart Araneta Coliseum.

Talk N’ Text, which has now won four straight after a lousy opening this conference, showcased brilliant ball movement which led to the fluid offense all game long.

Larry Fonacier and Ranidel De Ocampo had a lot of space from down town and knocked down four triples each to lead the team with 16 and 15 points, respectively.

It was Fonacier, though, who quashed the Llamados’ building momentum in the fourth quarter as his triple stretched the Texters’ lead back to a comfortable 71-55 edge with eight minutes to go.

Despite leading all throughout, Talk N’ Text never relented especially after BMeg slashed down the deficit to single digits in the third quarter.

An 8-2 blast to open up the payoff period, capped by Fonacier’s triple, was all the Texters needed to ward off the opponent for good which puts them in a prime spot to grab a semifinals spot.

Two squads are already in, and four other spots are still being disputed with a lot of teams stuck with the same record like B-Meg and Talk N’ Text at 5-3.

Import Paul Harris, who had 14 points and 10 boards, puncuated the victory with a thunderous jam in the final minute as a big winning margin could come in handy when the quotient system comes to play.

“I think there’s a situation where we’re going to be at the mercy of the quotient, so we really pushed it until the end and extended the lead,” said head coach Chot Reyes.

The Llamados simply didn’t possess the needed zeal and they never recovered from being held to just 10 points in the opening quarter while Talk N’ Text scored more than double.

Yap only had nine points on a horrendous 2-of-18 shooting along with three turnovers.