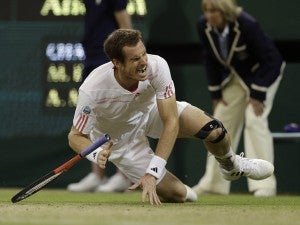 Andy Murray of Britain falls as he plays Marcos Baghdatis of Cyprus in a third round men's singles match at the All England Lawn Tennis Championships at Wimbledon, England, Saturday, June 30, 2012. AP/Anja Niedringhaus

LONDON – Andy Murray reached the Wimbledon fourth round on Saturday with a 7-5, 3-6, 7-5, 6-1 win over Marcos Baghdatis in a match which finished just past the 11:00pm Centre Court curfew.

The fourth seed will face Croatia’s Marin Cilic, who clinched victory over Sam Querrey in the second longest match in tournament history, on Monday for a place in the quarter-finals.

On another day of high drama at the All England Club, three-time finalist Andy Roddick was knocked out, a defeat which sparked more questions over his future in the sport.

Scotsman Murray, a semi-finalist for the last three years, triumphed at 11:02pm (2202 GMT) under the roof on Centre Court, two minutes beyond the deadline set by the local municipality for health and safety reasons.

It was the latest-ever finish at the All England Club.

Murray had broken to lead 5-1 just as the clock hit 11:00pm and was allowed to serve out the match.

“When I got up at 4-1 I tried not to sit down. I don’t know what the rules are, maybe the first time that’s happened here,” he said.

“Tough conditions. I was really struggling. I struck the ball a bit better under the roof and served better.”

Murray took the first set 7-5 before Baghdatis levelled then tied by taking the second 6-3.

Just after 9:00pm (2000 GMT), play was stopped as the roof was closed, a process which took around half an hour.

On the resumption, Baghdatis broke in the third set for a 3-2 lead before Murray survived a nasty-looking fall to level at 4-4.

At 5-5 in the third set, Murray was docked a second point after his spare ball fell from his pocket onto the court during a rally for the third time.

He shrugged off that setback to take the set and start his race against time to finish the match which he did – but only just – against a physically wilting Baghdatis.

But it was Roddick’s farewell gesture to Centre Court which was the talking point.

The 29-year-old applauded all four sides of the court, blowing a kiss to the fans, many of whom would have witnessed his three agonising final defeats to Roger Federer in 2004, 2005 and 2009.

That last loss, an epic five-setter, which ended 16-14 in the final set, was Roddick’s last memorable campaign at the All England Club.

He lost in the last 16 in 2010, the third round last year and Saturday’s loss, also in the third round, will only increase speculation over the former world number one’s career.

“I don’t have a definitive answer, I can’t give you much else,” said 2003 US Open champion Roddick, when asked if Saturday was his last farewell to Wimbledon.

At five hours and 31 minutes, it was the second longest match in Wimbledon history.

At least the United States had the consolation of seeing two men into the last 16 — Mardy Fish and Brian Baker.

Baker lost six years of his career to an assortment of injuries that left him needing five different operations on a hernia, left and right hips and his right elbow.

“It’s been unreal,” said Baker, who took a job as a college tennis coach to maintain his feel for the sport during his lengthy lay-off.

Czech world 100 Lukas Rosol, who had caused one of the greatest upsets in the history of the sport when he beat world number two Rafael Nadal in five sets in the second round under the Centre Court roof on Thursday, was knocked out.

Kohlschreiber will tackle Baker for a place in the quarter-finals.