No game-fixing in the PBA, says Allado 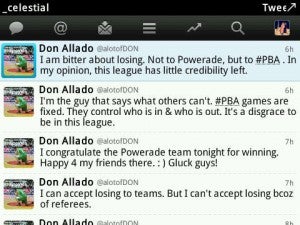 MANILA, Philippines—There is no game-fixing in the PBA.

That was what Barako Bull’s Don Allado assured, retracting his previous accusations about the league, following a meeting with PBA Commissioner Chito Salud Thursday morning.

“There’s no game fixing in the PBA, and there never was,” said Allado in a press conference at the PBA office in Libis. “I hope the fans can forgive me for what happened.”

Stirring great controversy, Allado issued an apology Wednesday night and also deleted all the tweets—one of which was accusing the PBA of controlling “who is in and who is out.”

Salud also stressed that there is no game fixing in the league, especially involving the office of the commissioner.

Allado is facing stiff sanctions— a lifetime ban as one of the options—for his statements, and the details of his punishment will be announced Thursday afternoon.