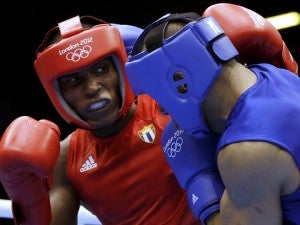 LONDON – The British are on a roll. The Indians are angry. The Americans are barely alive.

Everybody seems to be in a fighting mood at the Olympic men’s boxing tournament — and every bout from now is for a medal.

ExCel arena is about to get taken over for the next few days by the first Olympic women’s tournament, which begins Sunday afternoon. But the men’s competition is starting to heat up after the round of 16 finished Saturday night by keeping the British team on track for a landmark home Olympics and giving the Indian team another reason to be furious.

Stalker, the British team captain, survived his Olympic debut with a narrow win in front of a screaming, singing crowd — and India is certain that fan support played a role in the result.

Although Stalker and Kumar appeared to be evenly matched, Kumar and his coaching staff criticized the judges and the tournament after the fifth loss for a seven-man team that arrived in London hoping to add to its single Olympic boxing medal.

The Indian team has suffered several tough defeats in London, most painfully in the decision to overturn welterweight Krishan Vikas’ apparent victory over Errol Spence, the only remaining member of the U.S. team, late Friday night for an accumulation of uncalled holding fouls.

“This competition is very poor,” Indian coach Blas Iglesias said after Kumar’s loss. “We’ve seen very many poor decisions. How do you fight against a man who doesn’t want to box? All the rounds were the same” on the scorecards.

Early in the day, veteran Indian coach Gurbankhsh Singh Sandhu said his team had to move past its bitterness over world boxing governing body AIBA’s decision on Vikas’ bout. Light flyweight Devendro Laishram certainly did, posting a sensational 16-11 upset of fourth-seeded Serdamba Purevdorj of Mongolia, the silver medalist in Beijing.

Yet Laishram and middleweight Vijender Singh, the superstar who won the nation’s first boxing medal in Beijing, are the only Indian boxers left in London.

“We are disappointed, but a rule is a rule,” Sandhu said. “I can’t fight rules. I’m here to train the boxers, and they are here to perform.”

Stalker made no apologies for his victory, saying he overcame a slight cold and a week of uneasy waiting for his first fight.

At least two attempts at appeals have failed during the Olympics in a sport that frequently features close bouts between evenly matched opponents decided by its highly subjective scoring system.

Almost everybody who loses a close bout feels cheated, yet only some greet it with the class and sportsmanship shown by Sweden’s Anthony Yigit after a sensational 24-23 loss to second-seeded Ukrainian Denys Berinchyk.

“I can’t complain about the score,” Yigit said after trading three electric rounds with Berinchyk, a silver medalist at last year’s world championships. “It was a close fight. I think I landed a few more clean punches, but I can’t complain. I have a big heart.”

Although Stalker survived, another world No. 1 went down in the evening session. Bulgaria’s unheralded Aleksandar Aleksandrov shocked South Korea’s Shin Jong-hun 15-14 with a third-round rally.

In a fight that might have matched the two best amateur light welterweights in the world, Iglesias got a decision over Dos Santos, who upset him for the world championship a year ago. Iglesias, the 2009 world champion, took a narrow lead out of the first two rounds with superior speed and precision before holding off Dos Santos, the latest top seed to fall.

Zou is a three-time world champion who became a national hero by winning China’s first boxing gold medal in its home Olympics four years ago, but his road to a repeat will probably be much tougher.