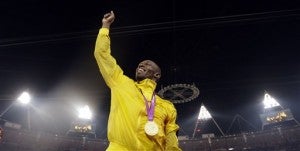 LONDON — IOC President Jacques Rogge wants to set the record straight: Usain Bolt is an “active” legend and the best sprinter ever.

Rogge raised eyebrows earlier this week when he said the Jamaican runner needed to prove his greatness over more than two Olympics before achieving his self-proclaimed status of “living legend.”

On Sunday, Rogge relented a bit and came up with a different wording for the six-time gold medalist.

“I mean this is purely a semantic issue,” he said. “Let me finalize this issue as follows: to say that Usain Bolt is an active performance legend, he is an icon, he is the best sprinter of all time.”

Bolt won the 100 and 200 meters at the London Olympics, becoming the first athlete to sweep both events at consecutive games, and anchored the Jamaican team to a world record in the 4×100-meter relay on Saturday night.

After the relay, Bolt said: “The next time you see him (Rogge) I think you need to ask him what Usain needs to do that no human man has ever done.”

On Thursday, Rogge said Bolt’s status should be determined at the end of his career. He cited Carl Lewis for competing at four Olympics, winning nine gold medals, including four straight in the long jump. Bolt has left open whether he will compete at the next Olympics in Rio de Janeiro in 2016, when he will be 29 and likely past his prime.

Rogge, meanwhile, said he was a “very happy and grateful man” with the success of the London Games and would offer words of praise in his speech at the closing ceremony on Sunday night.

“I will say these games were … something,” he said. “I think what I have to say, everyone will be pleased by it, and it will express the gratitude of the IOC.”

Rogge has always been reluctant to compare different Olympics, eschewing the habit of his predecessor Juan Antonio Samaranch of calling them “the best games ever.”

As for his favorite moment of the games, Rogge paused for several seconds before offering a “sentimental” choice.

“The tears of Chris Hoy — I think that was the defining moment of the games,” he said referring to the British track cyclist who won his sixth career gold medal to surpass rower Steve Redgrave as Britain’s most decorated Olympian.

He cited the 800-meter world record of Rudisha as a “magic moment.”

“This was beauty in action,” he said.

He praised the success of British athletes, who had won 28 gold medals going into Sunday’s final events. Rogge said he had told British officials years ago that the performance of the home team was vital to the success of the games.

“They had to wait two days for the first medal,” he said. “From then on, you couldn’t follow the pace any more.”

Rogge said Brazil, which had only three gold medals in London, will need to bolster its sports programs and medal chances ahead of the Rio Games.

“It’s time to start and kick off as soon as possible,” he said.

With Saudi Arabia, Qatar and Brunei sending female athletes to the Olympics for the first time, Rogge said it will take years before women’s sports become fully established in those countries.

“We need to work for a decade at least to see major improvements,” he said.

On the doping front, Rogge said 117 positive tests had been recorded in the four months before the games to weed out drug cheats, with another seven athletes caught in pre-competition controls and one during competition at the games so far.

“It’s a sign that the system works,” he said.