MANILA—Pacesetters San Sebastian and Lyceum shoot for their third straight victories against separate rivals Monday in the 87th NCAA basketball tournament at the FilOil Flying V Arena in San Juan. 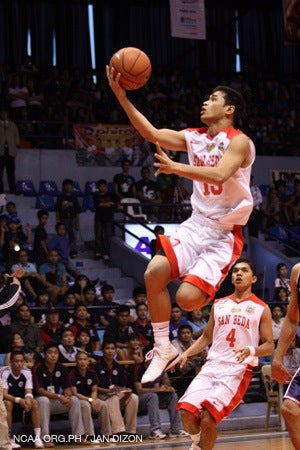 Unlike the Stags who are favored to roll past the winless Perpetual Help Altas in the 11:45 a.m. game, the Pirates are expected to have a tough outing against the defending champion San Beda Lions.

The 4 p.m. clash against the Lions will be a stern test for the Pirates, the beneficiaries of a kind schedule early in the season.

With Allan Santos powering its bid, Lyceum beat a short-handed St. Benilde squad, 75-63, and a sputtering Perpetual Help team, 93-87, to emerge as an improbable league leader.

But Lyceum coach Bonnie Tan said the Lions will be a difficult proposition for his squad.

“San Beda is tough,” Tan said in Filipino. “It’s a great chance for us to show where we are as a team this season.”

Santos, the muscular 6-foot-4 transferee from Adamson, has proven a key player for the Pirates with two-game norms of 15.5 points, 13.5 rebounds and four blocks that earned for him the Accel-361 NCAA Press Corps Player of the Week presented by Gatorade.

The Lions opened their season with aplomb, crushing Perpetual Help, 82-52, minus their injured star Sudan Daniel.

The 6-7 Daniel is out for the season with a knee injury, leaving Dave Marcelo, Jake Pascual and Kyle Pascual to man the paint for San Beda.

“I think we’re still OK (even without Daniel),” said San Beda coach Frankie Lim, who drew double-digit outputs from Pascual, Marcelo and Rome Dela Rosa in the victory over the Altas.

The Stags are coming off an 86-78 win over the Blazers Friday in a game that marked the return of fiery forward Calvin Abueva.

Aside from Abueva, the Altas will have to deal with Ian Sangalang, who has averaged 20.5 points in the first two games.