Marquez knocks out Pacquiao in 6th round | Inquirer Sports

Marquez knocks out Pacquiao in 6th round 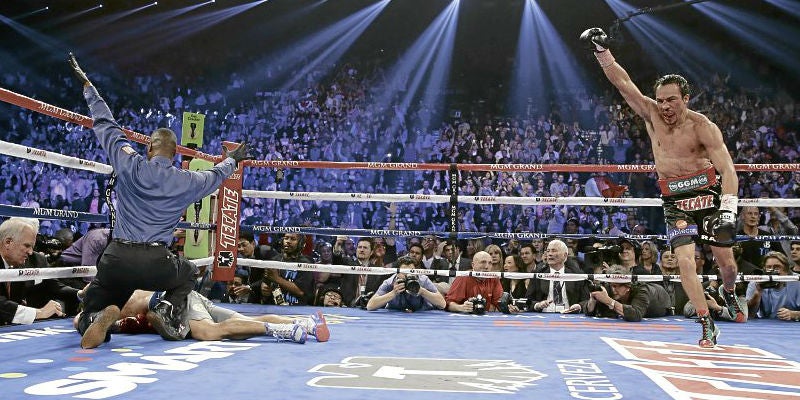 DOWN AND OUT Referee Kenny Bayless calls the fight over after Filipino boxing hero Manny Pacquiao is knocked out by Mexico’s Juan Manuel Marquez in the final second of the sixth round of their World Boxing Organization (WBO) welterweight nontitle match at MGM Grand Garden Arena in Las Vegas, Nevada. AP

As he unleashed a left jab, the favored Pacquiao ran smack into a thunderous Marquez right that sent the Filipino flat, face down, to the canvas, motionless for more than a minute.

The decisive punch came with barely a second left in the sixth of the 12-round fight before a full-house crowd of 16,348 at MGM Grand Garden Arena.

The scene was so frightening that Pacquiao’s wife Jinkee turned hysterical on the front row. Wanting to get near her husband, she was restrained and consoled by promoter Bob Arum.

“I got hit with a punch I didn’t see,” the 33-year-old Pacquiao said before being taken to the nearby University Medical Center for a checkup. “I thought I was getting him in the last couple of rounds but I got hit by a strong punch. I did not expect that punch.”

Marquez’s own face was a bloody mess from a barrage of lefts by Pacquiao.

“I am very, very happy,” said Marquez, who fought with a bruised nose for the last few rounds. “How do you tyink I feel? This is a result of all the hard work I did.”

Pacquiao was promised more than $20 million for the fight while Marquez was expected to take home $6 million.

Although he didn’t bring the fight to Pacquiao as promised, Marquez, 39, delivered on his vow to exact revenge on the Filipino hero, who narrowly beat him in the second and third fights of their quadrilogy.

It was the first time in 12 years that Pacquiao had been stopped. Not that he was invincible, but Marquez sent the message that the Filipino ring icon was vulnerable, too.

Marquez’s well-timed right straight that landed squarely on Pacquiao’s jaw was deemed as powerful as the one that Pacquiao unleashed to knock Briton Ricky Hatton out cold in the second round in 2009.

As a routine precaution, Pacquiao was sent to the hospital for examination.

Pacquiao was pressuring Marquez in a corner when the blow came. “It was a good shot. I will take a rest and come back to fight,” the Filipino said.

That will depend, however, on the medical report about him that is expected soon.

Pacquiao’s fifth loss against 54 wins and two draws added gloom and misery for the Philippines, which is still reeling from the devastation brought by Typhoon “Pablo.”

In contrast, Marquez’s 55th triumph against six losses and one draw sent Mexicans who watched the blockbuster fight card into a frenzied celebration that spilled over to the MGM lobby and even to the Strip.

The victory was so big that people in Mexico reportedly spilled out into the streets to celebrate the downfall of the man who had dealt beatings to Mexico’s best fighters in the last decade.

“I landed the perfect punch,” Marquez said through an interpreter. “I knew that he will try to finish me off so I stood my ground.”

Caught by a solid right that put him on the canvas in the third round, a startled Pacquiao got up and gamely traded punches with Marquez.

As the cobwebs cleared in his head during the break, Pacquiao went back on an attack mode in the succeeding rounds, landing a left in the fifth that buckled Marquez, whose gloves touched the canvas and who received a standing count.

Pacquiao seemed bent on finishing Marquez, but he got careless and paid a stiff price.

According to his Hall of Fame trainer Freddie Roach, the Filipino’s ring career of Pacquiao now hung in the balance.

“We don’t know how to proceed until we get all the facts on his medical condition,” said Roach, who admitted that Pacquiao got careless in his desire to knock out Marquez.

Arum said the bout lived up to the hype that it would be even better than their previous bouts, the first of which ended in a controversial draw after Marquez recovered from three first round knockdowns.

On Saturday, Pacquiao was ahead after five rounds on the three judges’ scorecards, 47-46, and was dominating the sixth when Marquez detonated the bomb so powerful that the referee, Kenny Bayless, saw no need to count.

Asked whether a fifth fight would be in order, Arum replied: “Why not? Had you seen a more exciting fight in years?” he said.

Later, however, at a postfight conference, Arum said he didn’t operate that way as a promoter.

Arum noted that Marquez’s appearance in the press conference was suspect as the Mexican might have suffered a broken nose, having difficulty in breathing, and possibly even a concussion.

Marquez appeared to the chants of his adoring compatriots, who outnumbered and outscreamed the Filipinos.

Officially, it was back-to-back defeats for Pacquiao this year as the judges deprived him of a victory against the American Timothy Bradley in June.

A huge Marquez right hand put Pacquiao down at 2:59 of the sixth.

It was a stunning end to a thrilling nontitle fight, the fourth one in the last eight years between the two men. Pacquiao said he would like to fight Marquez for a fifth time.

“If you give us a chance, we’ll fight again,” Pacquiao said. “I was just starting to feel confident and then I got careless.”

“I thought I was getting him in the last couple of rounds but I got hit by a strong punch,” he said. “I never expected that punch.”

It was actually a triple whammy for Filipinos in the televised bouts as Michael Farenas and Mercito Gesta also failed in their title bids.

Battling with nearly shut eyes, Farenas lost by a unanimous decision to the heralded Yuriorkis Gamboa in their battle for the World Boxing Association (WBA) interim superfeatherweight crown.

Gesta also bowed by a unanimous decision to reigning titlist Miguel Angel Vazquez in their fight for the International Boxing Federation lightweight title.

Nothing compared, however, with Pacquiao’s loss as it was deemed a national tragedy. Coupled with the ravages wrought by Pablo in Mindanao, the Filipinos seemed to have two reasons less to be jolly this Christmas.

Peñalosa decked Jesus Lule-Raya with 1:12 gone in the second round to stretch his perfect record to 10 wins, all by knockout. He need not look far for inspiration—his father and namesake was a two-divison world champion, just like his uncle, Gerry.

The 20-year-old Sanchez downed Philadephian Coy Evans in the third round and went on to win by a unanimous decision. He brought his record to 14-3, with 5 knockouts.—With a report from AP and Celest Flores