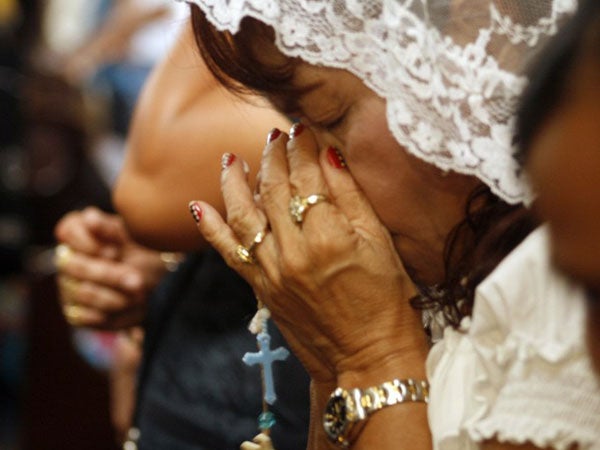 Dionisia Pacquiao, mother of Manny Pacquiao, prays at a church in General Santos City on June 10, 2012. At the Pacquiao Mansion in General Santos City on Sunday, Dec. 9, 2012, Dionisia was furious about the procession of Protestant pastors crowding his son. “That’s what he gets for changing religion,” she said after her son was knocked down by Juan Manuel Marquez in the US on Sunday (Manila time). AFP PHOTO/PAUL BERNALDEZ

That’s what he gets for changing his religion,” Dionisia Pacquiao said in an interview in General Santos City.

Her son, Filipino boxing hero Manny Pacquiao, had been losing sleep because of night Bible studies with “Protestant pastors.”

So he went to sleep in the middle of a 12-round welterweight fight with Mexico’s Juan Manuel Marquez in Las Vegas on Saturday night (Sunday afternoon in Manila).

A short right to the chin during a close-quarters exchange toward the end of the sixth round felled Pacquiao. He was out cold for two minutes.

Pacquiao left the Catholic Church last year and went with a Bible-based movement whose members called themselves Christians.

They are not Protestants, but Mommy Dionisia refers to them as Protestants and she is furious every time they come to her son’s mansion in General Santos City and crowd around him.

“Since the Protestant pastors came into his life, he has not focused on his boxing,” Mommy D said. “They always pray, with Manny losing sleep.”

If the decision were hers to make, her son should retire from boxing after his stunning defeat. And he should go back to the Catholic Church.

“I hope he listens to me when he returns, and be a Catholic again,” she said.

A religious athlete who used to hear Mass before every fight, Pacquiao turned to the Bible to reform his ways. He gave up gambling and drinking and dropped extramarital affairs.

But late-night Bible studies took the place of the rest he needed to keep fit. That took a toll on his health, and his 33-year-old body was just not ready for a bulked-up Juan Miguel Marquez.

And he did not hear Mass before their fourth match. Instead he attended a Christian service held right in his hotel room in Las Vegas before the fight.

Mommy D disapproves of her son’s ditching Catholicism for another religion.

She remains unhappy about missing the canonization of Pedro Calungsod, the Philippines’ second saint, in Rome in October because her son did not allow her to go.

“He said he didn’t have money for my air fare, but with these pastors he’ll be poor,” she said.

“He better stop being a boxer and be a pastor instead,” she said. “He lost because God wanted him to.”

Reynaldo Clapis, a former village chair of Labangal in General Santos, thought so, too.

“It’s painful to see him sprawled on the canvas face down. But I guess, it’s God’s will. God wants to remind him to be frugal in spending his money,” Clapis said.

Now that Pacquiao lost again maybe he would not squander his earnings in politics, said the former barangay chair.

Pacquiao had pledged to use part of the purse to help survivors of Typhoon “Pablo” in Mindanao.

The survivors in Andap village in the hardest-hit town of New Bataan in Compostela Valley watched the fight at the Rotary Park gym here. They said they were saddened by his loss.

“I hope we get a share of his earnings even if he lost,” said survivor Ruperto Rejas, 60.

The people watching the fight at the Lagao gymnasium in General Santos could not believe it when Pacquiao fell face down and remained motionless on the canvas for two minutes.

But when they realized what had happened, they rose and left.

Custodio cried quietly, but her mother wailed when she realized Pacquiao had been knocked out.

“[It hurts] to see him knocked out like that,” Antonino said.

But despite Pacquiao’s defeat, “he’s still our champion,” Custodio said.

“What happened today will never erase the sacrifices he made, as well as the honor he has brought to this country,” she added.

In Cotabato City, Jacky Mondejar, a local boxing analyst and among the first to train Pacquiao during the early years of his boxing career in North Cotabato, said Pacquiao’s performance had been diminishing these past two years and he needed to save himself by retiring with still eight belts from eight divisions.

Pacquiao-Marquez 4 was not a title fight, but Marquez was going home to Mexico as the conqueror of an eight-division world champion.

“He has to admit that many things preoccupied his career the last two years … I was sad his fight with Marquez ended this way, so devastating,” he added. With reports from Frinston Lim and Edwin O. Fernandez, Inquirer Mindanao