Pacquiao cries on TV for letting PH down | Inquirer Sports

Pacquiao cries on TV for letting PH down 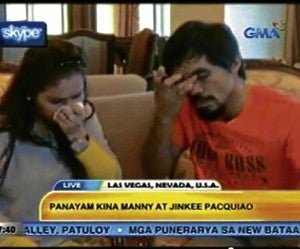 SO ASHAMED Manny Pacquiao, with wife Jinkee, brushes his tears away during a TV interview on Monday for letting his country down. VIDEO GRAB FROM GMA 7

HOLLYWOOD—Manny Pacquiao shed tears on Philippine television on Monday, saying he had let his country down.

But don’t count him out yet. A devastating knockout loss to his great Mexican rival Juan Manuel Marquez won’t make him quit boxing.

“I’m ready to fight in April,” Pacquiao told Manila-based sportswriters in a customized luxury bus that took them from Mandalay Bay in Las Vegas to Hollywood.

Pacquiao announced the date for his comeback fight to end all speculations about his boxing future following his sixth-round loss to Marquez in their fourth encounter on Saturday.

In Hollywood, the Pacquiaos were brought to their $2-million house near Hancock Park, where they were to spend the night. In  the garage were Pacquiao’s service car, a Mercedes Benz and his Ferrari 458 Italia, acquired just last year.

Interviewed on GMA network, Pacquiao indicated how deeply he felt the disappointment of his followers back home.

“The low morale, the sadness, I accept that. This is my job … But the reaction of the Filipinos, the many who cried, especially my family, it really hurts me,” he told the network.

The former eight-division world champion wiped tears from his eyes listening to his wife, Jinkee, make a tearful appeal on camera for her husband, who turns 34 next week, to hang up his gloves.

“When you see your husband get hurt, you cannot even sleep,” she said in the interview.

Asked if she wanted her husband to retire from boxing, she said: “You know the answer to that. He knows what I am asking him.”

In the bus, Pacquiao told the sportswriters that Saturday’s loss to Marquez “was similar to what happened to me against (Rustico) Torrecampo.” He was referring to his third-round knockout defeat on Feb. 9, 1996, when he was still fighting at 110 pounds.

“I got nailed by a sneaky punch that caught me in the chin coming in,” Pacquiao said in Filipino. “If it were in the jaw, I can withstand it.”

Swinging as if he was shadowboxing, Pacquiao admitted he got careless with Marquez because he wanted to put up a strong showing to end the sixth round.

“I faked twice and he got me [with that right] as I stumbled,” he said.

Despite the one-punch knockout that left him motionless—face down on the canvas for over a minute—Pacquiao said he was raring for a fifth fight with Marquez to get even. “Yes, why not.”

“Marquez was lucky. The next fight, I’ll get him,” he said, adding that he had intended to finish his Mexican rival in the seventh or eighth round to give fans what they wanted—an explosive fight.

“I saw his nose bleeding and that he had difficulty breathing,” Pacquiao said. “I was also told that his corner was ready to stop the fight in the seventh.”

Pacquiao fell short as Marquez, dubbed “El Dinamita,” threw a dynamite right that exploded on his face and knocked him out cold.

Despite the loss, Pacquiao said he was satisfied he was able to give the fans an explosive fight.

As a routine procedure, he was taken after the bout to the trauma unit of University Medical Center, where he underwent medical tests, including a CT scan, to find out if he had suffered a concussion.

The result was negative and he was cleared to return to his penthouse suite at the hotel.

He will be under observation for three days, although he was allowed to make the five-hour trip to Hollywood, including a traditional stop at midpoint Barstow.

No fight with Mayweather

Since he suffered no major head injuries, Pacquiao is deemed fit to fight again next year. Against whom and when, there’s no clear development yet.

While a lucrative fight with Floyd Mayweather Jr. is off the radar at the moment, the continuation of his ring saga with Marquez may be in the horizon.

Promoter Bob Arum, while hesitant to stage an immediate rematch because of the punishment sustained by both fighters, with Marquez suspected of having a broken nose, the 81-year-old big boss of Top Rank is reportedly being bombarded with requests for a Pacquiao-Marquez 5.

Another possible opponent, if Pacquiao’s original schedule of April 20 for his next fight is followed, is rising star Brandon “Bam Bam” Rios, a toe-to-toe fighter whose style should suit Pacquiao’s  just fine.

While Pacquiao also has a score to settle with Timothy Bradley, who beat him by a dubious split decision, Arum is not keen on the proposition, as their fight in June was a disappointment at the gates and failed to generate a million PPV (pay-per-view) buys.

In contrast, the Pacquiao-Marquez 4 was a blockbuster, with a sellout crowd of 16,348, gate receipts of $10.5 million and an assured 1 million plus PPV hits, which could put Pacquiao’s total income for the fight at between $25 million to $30 million.

Pacquiao is willing to take on anybody Arum will put in front of him since he wants redemption for the humiliation he suffered in Marquez’s hands.

Pacquiao and wife Jinkee are scheduled to take the Monday flight to Manila, arriving in the Philippines on Wednesday for the birthday of their son, Jimwell.

On Dec. 17, Pacquiao will turn 34 and more celebrations are scheduled in General Santos City and Sarangani province, where he’s running unopposed for a second term as congressman.

Also in the bus, emblazoned  with his  image  and  a teaser  of  Pacquiao-Marquez 4, were several pastors, boxers Dodie Boy Peñalosa Jr. and Ernie Sanchez, who both won in the undercard of Saturday’s fight,  and  Michael Farenas, who put up a gallant losing stand against Yuriorkis Gamboa, as well as Filipino television crews.

Pacquiao now faces some of the toughest questions in his 17-year career—does his future lay in boxing, politics, show biz, religion, or is there a new challenge on the horizon?

“Being the king of boxing, being the highest paid athlete in boxing …  it goes with the territory,” boxing analyst Ed Tolentino said. “For Pacquiao, the fame was too much to handle. There was just too many things on his plate other than boxing.”

The distraction was costly for Pacquiao, who trained for only two months, compared to Marquez’s four and a half months.

During that time the Mexican fighter bulked up and became more muscular to withstand the Filipino’s trademark furious blows that were so damaging in their three earlier encounters, said boxing commentator Ronnie Nathanielsz.

“You only need a Ferris wheel and his training camp would have been a circus,” Tolentino said.

“Among boxers, they don’t have the word retirement in their dictionary. It’s so hard to admit that all of sudden it’s over, especially for Pacquiao,” Tolentino said.

“His demotion was from the penthouse to the doghouse,” he added. “I think really there has to be a lot of soul searching. … He has to consult his family, his real entourage.”  With reports from AFP and AP