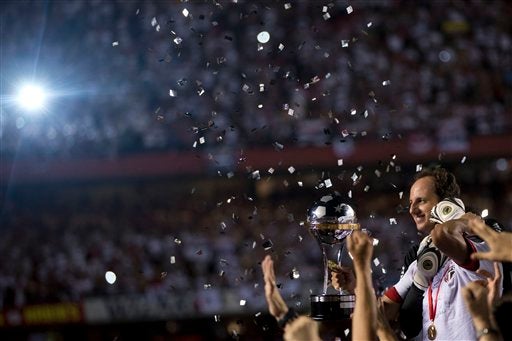 Brazil’s Sao Paulo FC’s player Lucas, right, is embraced by Sao Paulo’s goalkeeper Rogerio Ceni, top, as they celebrate at the end of the Copa Sudamericana final soccer match against Argentina’s Tigre in Sao Paulo, Brazil, Wednesday, Dec. 12, 2012. Referee Enrique Osses, from Chile, ended the match after Tigre’s players refused to play the second half. According to Tigre’s coach Nestor Gorosito, Tigre’s team members were attacked by Sao Paulo FC private security guards and police officers as they headed to the locker rooms at halftime. Sao Paulo was declared champion of the 2012 Copa Sudamericana after winning 2-0 on aggregate. (AP Photo/Felipe Dana)

SAO PAULO — Brazilian authorities on Thursday began investigations into allegations that security personnel beat members of a visiting Argentine football club at the halftime of the Copa Sudamericana.

South American football officials described it as the most serious incident in decades in the country that will host the 2014 World Cup — raising fears about Brazil’s ability to secure the event and putting a blemish on the country’s reputation just months before the Confederations Cup.

Wednesday’s final was called off and Sao Paulo was awarded the title when Argentina’s Tigre refused to take the field for the second half of the second leg of the final. Sao Paulo was leading 2-0, with the first leg having ended scoreless.

Officials of the Argentine club said their players and staff were beaten by security officials in the dressing room area at halftime and guns were drawn. Brazilian authorities denied, however, that any weapons were brandished by the private security guards.

The trouble off the pitch followed sharp scuffles between the teams at the end of the first half.

CONMEBOL spokesman Nestor Benitez told The Associated Press that what happened in Sao Paulo “stains the good image of South American football.” He said it was the most serious incident of its kind in 25 years.

Despite that, there was little debate within Brazil itself over the match — many of the comments posted on Twitter and other social networking sites hurled insults at the Argentine team for being poor sports, accusing them of wanting to fight more than play once they went down by two goals.

Violence is common around Brazilian football — images of police batting at rowdy fans is common, and fan-on-fan violence has begun to creep up again after a quiet few years. However, security personnel getting into a fight with players as is being alleged was virtually unheard of.

Shortly after arriving back home, Tigre captain Martin Galmarini described the violence as a “dramatic, chaotic and hellish episode.”

He said the team was harassed as it arrived at Sao Paul’s Morumbi stadium — a common occurrence in South American football.

“They broke all the windows of the van, hurled rocks and beer bottles and we are not allowed to warm up on the pitch,” he said.

The trouble at Morumbi stemmed from confrontations between the teams following a first half in which the hosts had taken a 2-0 lead after goals from Lucas and Osvaldo.

“Police entered and struck our players with clubs,” Gorosito told Argentine television. “It was crazy. What happened was crazy.”

A Brazilian police officer who identified himself as Major Gonzaga told reporters that police were called to break up a fight between Argentine players and Sao Paulo security guards, but that that no one was armed and that police did not act violently.

“We were fighting for 15 minutes with people trained by, and wearing the colors of Sao Paulo. There was no need to do something like this. They were winning the match,” said Tigre keeper Albil.

For Juca Kfouri, one of Brazil’s leading sports commentators, Brazil’s image in the lead up to the 2014 World Cup took a hard hit.

“What happened at the final was a serious setback to Brazil’s image as host of next years’ Confederations’ Cup and the World Cup,” Kfouri said by telephone.

Nestor Gorosito, the coach of Tigre, declined to take his team back on the field for the second half. He said security officials pulled guns on his players while others clubbed players and team officials.

“Rocks were hurled at the bus carrying the Argentine players to the stadium. They were not allowed to practice at the stadium and the team’s private guards were reported to have threatened the Argentine players with guns,” Kfouri said. “These barbaric things took place all the time in the last century between the 1920s and 1970s. It is a sad return through the tunnel of time to the deplorable past of South American football.”

He added that it is “a past that caused European teams like Milan and Real Madrid to refuse to come to South America to dispute the Intercontinental Cup” — the predecessor to the Club World Cup currently being played in Japan.

The chaotic scenes in Sao Paulo, before a sellout crowd of 65,000 at Morumbi stadium, are sure to trouble FIFA — the governing body of world football — which is already frustrated by Brazil’s slow preparations to host the World Cup.

Most of FIFA’s angst so far has been focused on getting stadiums and new infrastructure in place. Now security also looms as a concern for the World Cup, which will be played at 12 venues across the country.

Violence on and off the pitch still blights many matches in South America, with Brazil and Argentina particularly affected. For the World Cup, FIFA relies on local officials and police to enforce safety at the stadiums.

FIFA said it could not comment on the incident since it was not involved in its operation.

“However, for the FIFA Confederations Cup and the FIFA World Cup there will be a comprehensive security concept for the stadiums in place developed by the Local Organizing Committee together with the respective authorities and reviewed by the FIFA security experts” FIFA said in a statement

It added that “more than 30,000 security officers will be trained and certified to work during the FIFA Confederations Cup and FIFA World Cup and that it has full confidence in the security arrangements developed.”

With the 2016 Summer Games slated for Rio de Janeiro, Olympic officials also are sure to review the incident.

Romer Osuna, a Bolivian official with CONMEBOL, said Tigre players were afraid to return to the field after the first half of play.

“The Tigre people declined to play because they considered security was not good enough,” Osuna told Fox Sports.

Referee Enrique Osses of Chile awarded the victory to Sao Paulo after waiting about 30 minutes for Tigre to retake the field.

Sao Paulo scored twice in five minutes in the first half — a left-footed drive from Lucas in the 23rd and a lobbed shot from the right wing by Osvaldo in the 28th.

Sao Paulo, one of Brazil’s most famous clubs, is a three-time winner of the Copa Libertadores, South America’s most prestigious club tournament. It has also won the Club World Cup once, and twice won the Intercontinental Cup.

This was the club’s first Copa Sudamericana title.

Tigre was playing in its first international final and has never won the Argentine first-division title.