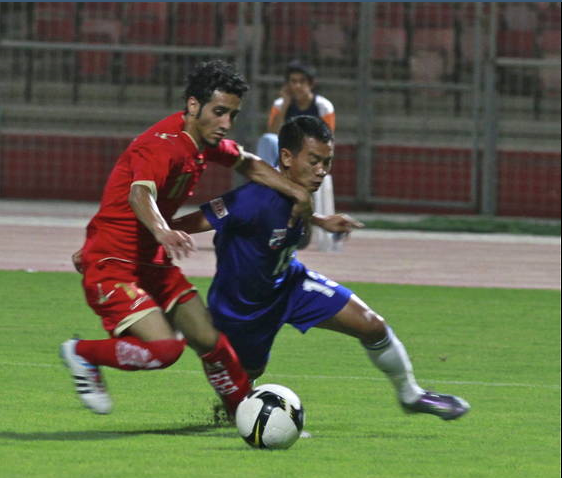 MANAMA—Chieffy Caligdong continued his brilliant form, but it wasn’t enough to lift the travel-weary and short-handed Philippine Azkals past Bahrain’s Under-23 Olympic Team Saturday night before a loud crowd of 10,000 Filipinos at the National Stadium in Riffa.

Bahrain won the exhibition match, 2-1, with Caligdong, the veteran winger from Barotac Nuevo, Iloilo accounting for the lone Azkals’ goal in the first half.

Getting plenty of space at midfield, Caligdon grifled home a sublime left-footed effort from 30-yards five minutes before halftime in what he said as one of his best goals for

the country since he debuted in the Tiger Cup in 2004.

Caligdong, the co-skipper together with Aly Borromeo, also scored on a virtuoso finish for the opening goal in the 4-0 rout of Sri Lanka in the second leg of the first round

But the euphoria that enveloped the stadium on Caligdong’s goal was short-lived as Bahrain grabbed the winner five minutes into the second half when Sayed Dhiya Saeed beat Eduard Sacapaño from close range following a defensive mix-up.

“The match has to be seen as a training session for the players who will take the pitch in Kuwait on Saturday,” said Azkals coach Hans Michael Weiss.

“The travel preparations were not ideal as some of the players arrived in Bahrain the morning before the match.”

The second match of this two-game series dubbed the Bahrain-Philippines Football Friendship Games is slated at 7 p.m. Monday (12 midnight in Manila) at the Muharraq Club Stadium in Arad and Weiss promises to take a “less cautious and aggressive approach.”

“The result is not that important,” said Weiss. “What’s important is adapting to the weather. It was quite hot during the game but I think the longer we played, we were able to withstand (the heat).”

“The goal gives me a lot of confidence,” said Caligdong, who has nine full international goals under his belt. “Hopefully, this also gives the team a morale boost before Kuwait.”

Caligdong said the team has no problems dealing with the hot weather, but must address the lack of aggressiveness in the early goings.

The Azkals are gearing up for the second round showdown with 10-time Gulf Cup of Nations champion Kuwait on Saturday. The second leg is set July 28 at the Rizal

Weiss also didn’t have the luxury of the same full-strength side that beat Sri Lanka as he was forced to field a younger, inexperienced team against the Bahrainis.

Weiss kept Phil Younghusband and Angel Aldeguer, who combined for three goals in the victory over Sri Lanka, on the bench because of injury.

Standouts Stephan Schrock, Paul Mulders, Jerry Lucena and Ray Jonsson are still tied up with their clubs in Europe while the Azkals are still awaiting the arrival of veteran

Newcomer James Hall, a former youth team player at English Premier League side Everton, started for the Azkals just behind Yannick Tuason up front.
Patrick Hinrichsen, an attacking midfielder, was deployed as rightback early on together with Anton del Rosario, Borromeo and Roel Gener, who played the entire 90 minutes despite traveling for 12 hours the morning before the match.

Jason de Jong was paired up with Manny Ott at midfield for the first time since the Suzuki Cup qualifiers in Laos, while Caligdong and James Younghusband provided the attacking threat on the flanks. Defender Jason Sabio came in as a sub, along with Ian Araneta and Misagh Bahadoran.

Facing a squad that has advanced to the main round of qualifying for the 2012 London Olympics, the Azkals were kept on the backfoot early and fell behind nine minutes into the match when Abdulwahab Al Malood eluded Anton del Rosario on the right before firing a shot past Sacapaño.