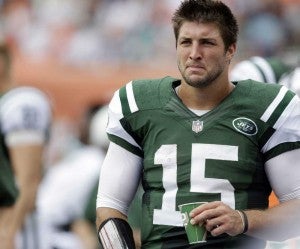 The Jacksonville Jaguars made it clear Thursday that they have no plans to pursue the popular and polarizing New York Jets backup quarterback.

The Jets are likely to release the 2007 Heisman Trophy winner and Jacksonville native during the offseason, and many believed Tebow would land with the Jaguars.

“I can’t imagine a scenario in which he’ll be a Jacksonville Jaguar – even if he’s released,” Caldwell said.

And Caldwell won’t get any pushback from his new owner.

Shad Khan, who made a run at Tebow last year, said it was Caldwell’s call.

“It’s not my decision,” Khan said. “I want to do whatever to help this team win. Who the players are is really the general manager’s and coaches’ – it’s a football-side operation decision. It’s really not my decision.”

What has changed for Khan in the 10 months since he wanted Tebow?

“I’m telling them to take a look at Tebow and they’re saying, `We’re going to go in a different direction,'” Khan said. “That’s the difference.”

Tebow starred at nearby Florida, helping the team win two national championship, and created buzz that he would be a huge hit with the Jaguars. He would sell tickets and merchandise, many said, and bring the small-market franchise national recognition and Super Bowl rings.

Despite all the hype, the Jaguars passed on drafting Tebow in 2010 because former general manager Gene Smith didn’t view him as a franchise quarterback.

But after Khan took over last year and the Denver Broncos started quietly shopping Tebow, Khan told Smith to look into acquiring the left-hander.

The Jaguars increased their offer several times. By the end of negotiations, Jacksonville had offered a fourth-round pick and agreed to pay $3 million of the $5 million in advance salary the Broncos had already paid Tebow. The money the Jaguars offered was better than the little more than $2.5 million the Jets agreed to pay, and the draft pick was nine spots higher than New York’s fourth-round selection.

But it never really got down to the details.

The Broncos told the Jaguars they were allowing Tebow to choose between the teams, and the Jaguars believe Tebow picked the Jets because he felt he would have a better chance to compete for the quarterback job with Mark Sanchez than Blaine Gabbert and Chad Henne.

Still, the Jets failed to find a way to effectively use Tebow this season.

Apparently, the Jaguars don’t want to try now, either.

“We plan to address the quarterback situation, obviously,” Caldwell said. “Blaine is the second-youngest quarterback in the NFL, but we’re going to have open competition. Whether it’s through draft or through free agency, we’ll bring in some more people to compete at the quarterback position. We’re going to let the best player win that position.”