MANILA, Philippines — It was just the perfect comeback to the pro-league that multi-titled coach Norman Black was hoping for.

Black stood in the middle of Smart Araneta Coliseum on Wednesday, having just wrapped up another title series — just three months removed from his last — and adding another hardware to his already illustrious resume.

And out of the 11 titles as a PBA head coach, this one with Talk N’ Text was extra special.

“Actually this championship means a lot to me mainly because I’ve been away for so long,” said Black in the post-game interview after the 105-82 victory which capped TNT’s sweep of Rain or Shine.

“When I left in the PBA, almost 11 years ago now, I didn’t really leave because I wanted to leave, I was taken out of Sta. Lucia,” Black shared. “I just happened to get a job with Ateneo the very next year.”

“I’ve always wanted to go back to the PBA and have the chance to coach in the best league in the country, with the best players, and I was just waiting for the right time to be able to do that.”

When Black made the jump to the UAAP, he was already among an elite company of coaches who have steered their squads to 10 championships and more. 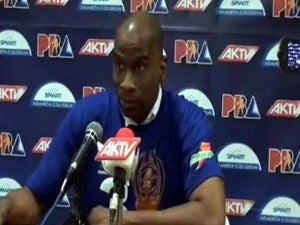 But being in the UAAP certainly kept Black in shape as a coach, and more.

“I learned a lot from the UAAP. The coaches there in the UAAP experiment a lot, so you get used to a lot of different things. You’re just about prepared for anything,” said Black.

In his head-to-head battle against another highly-regarded coach in Yeng Guiao in a best-of-seven finals, Black came out on top — devising the defensive schemes that certainly jarred the Elastopainters.

There wasn’t a time in four games that the Rain or Shine ever got its shooting consistently going.

“It’s always been my philosophy, even as a player. Defense wins championships. If your defense holds up, it will give you a chance to winning basketball games,” said Black.

But another key in Black’s triumphant return, undeniably, was the sheer talent in a squad with players who “are all willing to give everybody a taste of the spotlight.”

“Talk N’ Text is not only blessed with talented players but players with good attitude. They cooperate and execute for you. That’s really the key,” Black added.

He wasn’t able to fully bask in the glory of his last championship with Ateneo, assuming the coaching reins with Talk N’ Text just a day after he ended his stint in the UAAP

But this time Black is taking time — well, at least for a couple of days before the grind starts again for the 2013 PBA Commissioner’s — to savor it all.

“I want to take a break, maybe just 3-4 days without doing nothing,” shared a beaming Black.