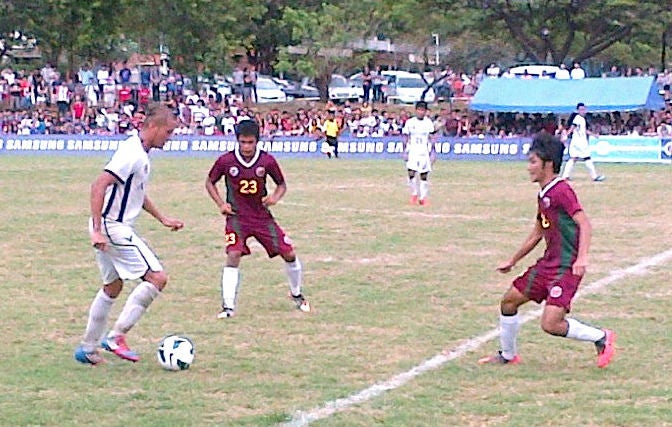 Ateneo player tries to hit at the ball as two UP booters look on. The Blue Eagles took a 1-0 lead in the UAAP football finals versus the Maroons. Photo by Celest R. Flores

MANILA, Philippines— Yu Murayama came up big twice and Ateneo clipped reigning titlist University of the Philippines, 4-3, in a penalty shootout in game one of the UAAP season 75 men’s football finals at the Moro Lorenzo Field in the Loyola-based campus.

Murayama, who is on his third playing year, scored the winning penalty for the Blue Booters as Gabe Mendoza had the fifth penalty for the Maroons blocked by Nicholas O’Donnel.

“He knows kung paano ako sumipa so I tried to put it in the middle. I knew he would go for my stong side,” Murayama told the reporters after the game.

The score was locked at 1-1 in regulation time, with Ateneo equalizing as Murayama scored on a header off a cross from Christopher Sumulong in the 83rd minute.

“My goal wouldn’t be possible without the cross,” added the 24-year-old Murayama.

The Maroons, meanwhile, held a 3-2 lead in penalty shootout as Reymark Fernandez converted his kick and Mico Mabanag missed for the Blue Eagles.

But just like in regulation where it took a 1-0 lead on a goal from Vincent Aguilar in the 33rd minute, UP squandered its edge in penalty shooutout.

Carlo Liay, who—according to coach John Paul Merida—was playing with an injury all game, tied it 3-3 for Ateneo, which never looked back from there.

The Blue Booters, who are gunning for their sixth overall title, were even down to ten men in the 30-minute extra time as Christian Noel was sent off for two yellow cards.

The Maroons’ star striker served out a one-game suspension for his second yellow cards in the semifinals.