MANILA— NBA superstar Kobe Bryant once said that Manila is ‘one of his favorite cities in the world.’

And after a rendezvous with the most passionate fans, Bryant surely won’t be the only one in love with the basketball hotbed that is the Philippines.

As the nine NBA stars traveled across the globe, in a behind-numbing 16-hour flight, to give the basketball-loving Filipinos a once-in-a-lifetime treat–all of them had an incredible hoops experience to share back home.

“I feel like this was a real All Star game,” said Chris Paul of the New Orleans Hornets to the replete crowd at the Araneta Coliseum Sunday.

“We’re miles away from home, but you couldn’t have welcomed us as well as you did,” added the charismatic star playmaker.

Truth was, the ‘CP3’ the entire Manila witnessed was not the same hero the city of New Orleans saw push the Lakers to six backbreaking games in the playoffs last May.

Instead, it was the wily showman who sure knew how to direct a mean highlight reel as Paul set up sky-high alley oops to his soaring teammates all night long. 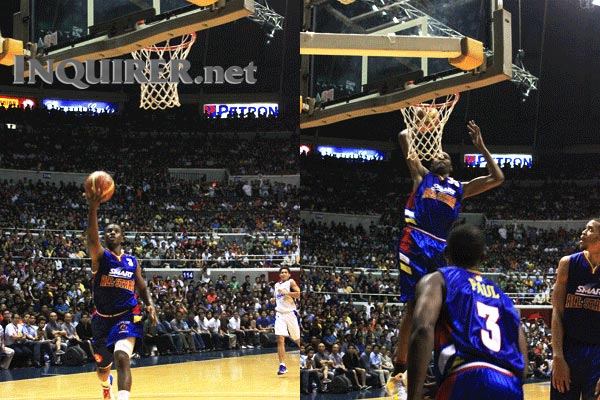 Chris Paul sets up a throwdown for Kevin Durant in an exhibition game against the Philippine national team last July 24, 2011.

Back-to-back NBA scoring champion Kevin Durant also didn’t waste any time showing his unbelievable range like the dates July 23 and 24 were the playoffs and Manila was Oklahoma City.

The “Durantula” scored a combined 38 points in two games, with half of those coming from way downtown.

“Thank you for giving me a chance to come across the world and experience something different!” posted Durant on his Twitter account, addressing his agent.

“I love the Philippines. Had so much fun hoopin in front of you all,” Durant also said.

Even the laid back reigning NBA MVP Derrick Rose, who probably breaks ankles more than he actually smiles on the court, could not help but spill his appreciation to the earsplitting M-V-P chants resonating at the Big Dome.

By doing what, exactly? By flashing rare wide grin.

“I love it here,” expressed Chicago Bulls’ Rose, who got one of the loudest cheers the entire weekend for gamely showcasing his spellbinding athleticism.

A rare sight was a breathtaking throwdown by Rose coming from a fancy dish by another MVP, Kobe Bryant–something you wouldn’t even see in an NBA All-Star game.

Well, Unless Kobe gets traded to a team from the East in the near future.

And speaking about firsts–no one in Manila could ever forget the wiry Washington Wizards center Javale McGee–who was probably the first player to ‘plank’ in the middle of the hard court on a live game, just as he promised.

“If I dunk on somebody today I’m gonna plank,” said Mcgee on his Twitter.

The enigmatic McGee relentlessly dazzled the crowd, who was yearning for something  more than textbook layins and jumpshots, with the Statue-of-Liberty dunk after the other.

“So much love in Manila. Hope to comeback soon, ” said McGee.

Like McGee, Tyreke Evans and Derrick Williams, amazed with the patented Filipino hospitality, are already thinking about going back before even leaving the country.

“Hope y’all had as much fun as we did! Thank you all again! We will be back,” said Williams, the second overall pick in this year’s draft who hasn’t even played a single NBA game yet.

“I would definitely come back and do a basketball camp. It would be my pleasure,” tweeted Evans, the 2010 Rookie of the Year from Sacramento Kings.

Even the legendary LA Lakers guard Derek Fisher, who also got a warm reception from the overzealous crowd, described his experience short and sound. While all of them more than willingly put on a show, James Harden surely gained more fans in this side of the world for his comical and truly accommodating attitude.

Harden easily posed for photos, danced at the sidelines, and astonished with countless slams which the crowd responded to with “fear the beard” cries.

“Game was Amazing! Shouts out to Manila Philippines for allowing us to visit and the hospitality!” Harden said.

In fact, Williams and Harden fell in love with the city too much that they had the guts to brave the usually-crowded mall Greenhills for last minute shopping spree, something some of Filipinos couldn’t even stand.

“At the mall today. Crazy! The mall was like ‘James Harden..James harden..Can I touch your hand, that’s all I want. Hahaha,” tweeted the seemingly amazed Williams.

Not as crazy as during the actual exhibition games though.

As the fans lined up for hours under the heat just to score Standing Room Only tickets with a coliseum filled to the brim, it was a simple but downright affirmation that the Philippines will always be a basketball-crazy nation.

And with the ardent reception they laid out to their basketball gods, the Philippines and the Filipinos fans will be the talk of the town among the NBA players for quite some time.

“It’s been a tremendous honor to play here,” said the five-time champion Bryant.

“Thank your for the love and support that you have in the sport. It was our first time playing here, hopefully this won’t be the last,” Bryant finished.