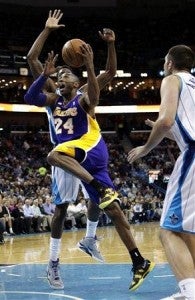 NEW ORLEANS — Kobe Bryant’s clutch scoring saved the Lakers from what could have been an embarrassing loss in a game they needed to win.

Bryant scored 13 of his 42 points during a 20-0 run in the last 6:22 of the fourth quarter, and Los Angeles overcame a 25-point deficit to fend off the New Orleans Hornets, 108-102 on Wednesday night.
The Hornets were still ahead by 21 in the final minute of the third quarter when Greivis Vasquez’s 3-pointer made it 93-72, and even after the Lakers had whittled their deficit to 12, the Hornets were up 102-88 after Robin Lopez’s dunk with 6:47 to go. But the Hornets would not score again, and Bryant, who also had 12 assists, began to take over with help from Jodie Meeks, who hit two of his five 3-pointers during the final surge to finish with 19 points.
Dwight Howard had 20 points, 15 rebounds and four blocks for Los Angeles, including a block on
Lopez in the final minute.
Bryant, who injured his right elbow in a loss at Oklahoma City on Tuesday night but played through it to score 30 against the Thunder, scored 25 points in the second half, 18 in the final quarter as the Lakers (31-31) pulled back to .500 and remained within three games of the last playoff spot in the Western Conference.
Metta World Peace added 11 points for Los Angeles.
Eric Gordon scored 18 for New Orleans but missed all five shots in the fourth quarter. Vasquez had 15 points and 12 assists, but missed all six of his shots in the final period. Ryan Anderson scored 14, while Lopez had 13 points and 11 rebounds.
Anthony Davis added 13 points for New Orleans but played less than a minute of the fourth quarter because of coach Monty Williams’ decision to leave Anderson in the entire period.
Al-Farouq Aminu had 12 points and 16 rebounds, and Austin Rivers had 10 points on 5-of-6 shooting, but did not play in the second half because of a right hand injury.
The Lakers came in with a nine-game regular season winning streak against New Orleans, but when Howard’s rim-rattling dunk gave Los Angeles an 8-4 lead, that was the largest lead the Lakers would have until the final seconds.
The first quarter ended in a tie at 28 after Aminu’s short floater, then the Hornets stunningly turned in their best single quarter of play in the entire season.
New Orleans scored 39 points in the second quarter, giving them a season-high 67 points at the half.
Rivers, playing more aggressively and confidently than usual, opened the period with a driving layup that ignited a 7-0 run that included Anderson’s 3. Later, Rivers spun into the lane and pulled up for a short jumper, then added two more floaters in what turned into a 27-6 run. Gordon hit three 3s during the spurt.
Davis, shaking his right hand after missing an alley-oop dunk in traffic, came back seconds later with a layup as he was fouled by World Peace. He then blocked a shot and hit a one-handed pull-up in the lane. Aminu’s free throws capped the run, which gave New Orleans its largest lead at 63-38.
Bryant settled the Lakers down by taking the ball inside and getting to the foul line, scoring six straight. He finished the quarter with a driving layup as he was fouled to give him 17 points and pull Los Angeles to 67-48 at halftime.
ADVERTISEMENT
FEATURED STORIES
SPORTS
I do what I want, says Kyrgios after breaking Wimbledon dress code
SPORTS
NBA: Lakers sign Thomas Bryant to one-year deal
SPORTS
NBA: Wizards sign Bradley Beal to $251M pact with rare no-trade clause

Read Next
LeBron hits game winner as Heat top Magic for 16th win in a row
EDITORS' PICK
House energy committee chair Arroyo bats for cheap electricity
UK’s Boris Johnson will resign, BBC reports
Unemployment rate up to 6% in May
Geek out at TOYCON 2022 powered by Smart Signature
High inflation: Your P1 is now worth only 87 centavos
High-risk pregnancy: Reducing your risk is in your hands
MOST READ
Suspect in grisly killing of missing woman in Bulacan arrested
Kim Atienza’s daughter flaunts bikini body in response to critics of her ‘revealing photos’
Japanese artist who created ‘Yu-Gi-Oh!’ found dead in the sea
FDA probes popular Filipino noodle brand for ‘high level of ethylene oxide’
Don't miss out on the latest news and information.