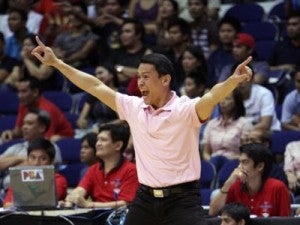 In the Bolts’ 112-104 victory, it was Ronjay Buenafe who came out firing off the bench in the payoff period to bury Barako Bull on Wednesday.

“It’s just great to see key players waking up after a long sleep. It’s just nice to see Ronjay heeding the call when we were struggling to find points in the fourth,” said the eloquent Gregorio.

Having payers like Chris Ross, Mark Cardona, Sunday Salvacion and Buenafe — who all have saved the Bolts at one point this conference — is Meralco’s biggest edge.

“I think if there’s one thing so significant in our team right now is you don’t know who’s going to light up,” he also said. “Tonight it was Buenafe who shone the brightest offensively.”

Meralco was just up by a hairline, 78-77, after three quarters when Buenafe, who was scoreless at that point, just caught fire.

He then uncorked three treys, one basket from inside the arch, and eight from the stripe to finish with 19 points — all in the fourth quarter.

“It’s a relief to have guns blazing in the fourth quarter,” he added.

With a hardworking import in Eric Dawson, who poured 27 points and 20 rebounds, also on deck, Gregorio believes they “are in a very good situation.”

But it’s just not about the offense, as Meralco came in the game with a game plan focused on stopping the Energy’s facilitator Josh Urbiztondo.

“We we’re preparing ourselves defensively but it’s such a great relief that we won using our offense as our main arsenal,” Gregorio said. “We did not allow Urbiztondo to take over the game.

But, naturally, Gregorio and Meralco are not resting on their laurels just even with a 4-3 card.

“We’re not yet satisfied. We are number four right now but the tough climb is just about to begin,” Gregorio said as the Bolts take on San Mig Coffee on Friday.