MANILA—The Philippine Azkals flirted with the biggest upset in the country’s football history only to be thwarted by a Kuwaiti side that proved too strong even with 10 men.

Egged on by an adoring throng at the Rizal Memorial Stadium, the Azkals put up a gallant stand, but again fell short to the powerhouse Al Azraq, 1-2, putting an end to their 2014 World Cup ambitions.

Thirty minutes away from posting a reversal that could have sent shockwaves in the footballing universe, the Azkals, already leading 1-nil, couldn’t finish the job.

They conceded a goal just moments after going a man up and got caught on the counter-attack later on in a heartbreaking end to what has been a historic journey to the second round of qualifying.

Needing a miracle of sorts to overhaul a 0-3 loss in the first leg in Kuwait Saturday night, the Azkals were given a glimmer of hope by Stephan Schrock, the fiery Fil-German midfielder, who rifled home a 25-yard rocket in the third minute of first half injury time.

“We would have loved to win it for the supporters of the team and for the country, but we knew Kuwait was at a different level,” said Azkals manager Dan Palami. “We will learn from this experience and hopefully, in the next few years we will be able to achieve more.”

“The team did a good job, they did their best. We are proud of them,” said Philippine Football Federation head Mariano “Nonong” Araneta. 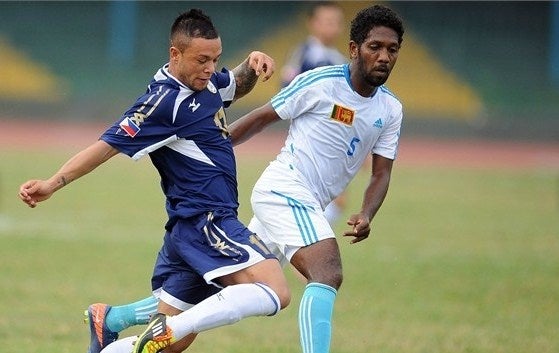 Schrock, who traces his roots from Parang North Cotabato but grew up in Nuremberg in Germany, had returned with the belief that the Azkals still had something in them to overcome the Kuwaitis.

“I wouldn’t have come home if I didn’t believe we could do it,” said Schrock, who scored his first goal for his “nanay’s”country.

Still coming to grips with the euphoria of scoring a goal against a team ranked 67 places ahead of them in the international football rankings, the Azkals cranked up the pressure on the counter attack early in the second half.

Phil Younghusband could have doubled the lead but his right-footed effort from just inside the box was again denied by Kuwait keeper Nawaf Al-Khaldi, who had foiled the Azkals striker twice in the opening leg in Kuwait.

The Azkals rode a roller-coaster of emotion in the space of two minutes starting in the 60th when Fahed El-Ibrahim was shown a red card for a tackle on Chieffy Caligdong.

Just moments after El-Ibrahim got his marching orders, the Kuwaitis equalized. Yousef Naser, who was about to be substituted, found plenty of space from 30 yards out and he fired past goalkeeper Neil Etheridge.

The goal left the crowd and the Azkals in stunned silence.

“I think the two games showed how beautiful and how cruel football can be,” said Azkals coach Michael Weiss.

“Everybody was going on the last drop of gasoline on the tank. We invested a lot and sacrificed. Its just sad that we were not able to finish the job. It was visible we did our best.”

Banking on quick counter-attacks, the Al Azraq were still proving dangerous and in the 85th minute Walied Ali finally put the game to bed by beating Etheridge on a one-on-one.

The Azkals came into the match confident with the return of Schrock and skipper Aly Borromeo from suspension. But the Al-Azraq picked up from where they left off in the first leg, dominating possession and getting a host of chances in the first 45 minutes.

El-Ibrahim had a long range shot was palmed away by Etheridge in the 23rd minute and Kuwait came tantalizingly close four minutes later when Yousef just sent his effort over the bar from Waleed’s cross.

Angel Guirado saw his header sail over the bar early and Rob Gier also had a header saved by Nawaf in the 10th minute.

In Kuwait’s best chance yet, Bader Al-Muhtwa hit the bar from close range after squeezing a shot in between Gier and Borromeo in the 33rd minute.

Etheridge had the slightest of touches on Jarah Al-Teeqi’s thunderous shot in the 38th minute, keeping the Azkals in the match.

“Its sad that the team that has been fighting so bravely the past six months can be punished so severely. But i think we can take this defeat fairly we and have to acknowledge that Kuwait was a very strong team.”