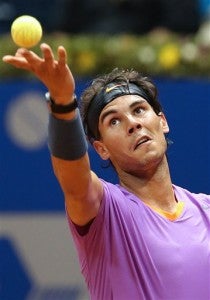 “They (Dortmund) are really good. I like their rapid style, and I really admire (attacking midfielder) Marco Reus,” Nadal told German news agency SID, a subsidiary of AFP, at the Monte Carlo Masters here on Sunday.

His praise was not confined to the players, as the former world number one described Dortmund manager Jurgen Klopp as “a super coach”.

The seven-time French Open winner however believes the last four Champions League match-ups are finely balanced, with “no favorites” in the Real v Dortmund clash nor in the other semi between Bayern Munich and Barcelona.

“The four best teams are in the semi-finals, anything can happen, it could all come down to the details,” said the Spanish star, adding that like the rest of his compatriots he was obviously rooting for “an all Spanish final”.

Offering his opinion on whether Barcelona’s Lionel Messi or Real’s Cristiano Ronaldo was the better player he said: “It’s impossible to say. But one thing is certain, we’re lucky to have these two champions in our league and putting on a show for us each week.”

Nadal, currently ranked fifth in the world, is bidding for his ninth title in Monte Carlo.