THERE CAN ONLY BE ONE The Philippines’ Jason Castro sneaks past Chinese Taipei defenders in a battle of undefeated teams in Group A of the 27th FIBA-Asia Championship at the Mall of Asia Arena Saturday. The Filipinos, however, lost the game, 79-84, to fall behind the Taiwanese in their group. NUKI SABIO/PBA IMAGE

MANILA, Philippines—Torched by the Taiwanese’ hot shooting, Smart Gilas Pilipinas fell to Chinese Taipei, 79-84, Saturday for its first setback in the preliminaries of the 2013 Fiba Asia Championships. 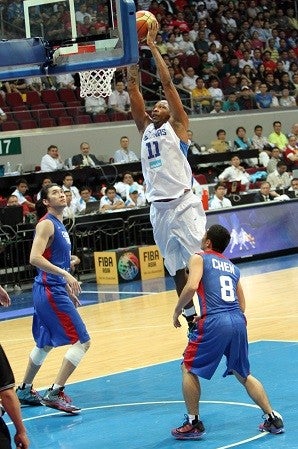 DUNKIN’ DOUTHIT Marcus Douthit of the Philippines dunks against Chinese Taipei’s Wen-Ting Tseng and Shih-Chieh Chen in their game at the 27th FIBA-Asia preliminaries at the Mall of Asia Arena, Saturday, Aug. 3, 2013. The Taiwanese dealt the Filipinos their first loss, 79-84, and stay undefeated in Group A. NUKI SABIO/PBA IMAGE

Taiwan rode on a hot start in the fourth, wiping off a 13-point deficit with a blistering 19-4 run, anchored on Cheng-Ju Lu and Chih-Chieh Lin’s solid marksmanship.

Lu and Lin combined for nine of the Taiwanese’ 15 triples—four of which coming in the fourth quarter—which ultimately keyed in the Filpinos’ doom.

But after stretching the gap to 68-55 at the end of third quarter, Gilas Pilipinas yielded eight straight points in just two and half minutes allowing Taiwan to gain steam.

Tseng and Lu then uncorked back-to-back cold blooded triples to give Taiwan the lead for good.

“I told my players to never give up. Lin told the team at the end of third we’re not finished. Just keep on scoring then maybe we’ll have a chance,” said Taipei’s head coach Chin-Che Hsu.

Lu and Lin scored 22 and 20 points, respectively, for Taiwan.