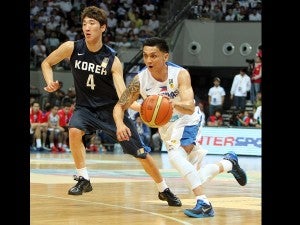 MANILA, Philippines—Against recent history, against a seemingly unconquerable tormentor and against the swell of a rising Korean momentum, Gilas Pilipinas wielded an indefatigable heart Saturday night to return to the world basketball stage.

“Tonight is a special night for Philippine basketball,” said Jimmy Alapag after the Philippines defeated South Korea, 86-79, in the Fiba Asia Championship at Mall of Asia Arena to book a ticket to the 2014 Fiba World Cup in Spain.

“It’s a special night for the country,” he added.

“I told the players before the game that now is the chance to right our story, the Gilas story,” said national coach Chot Reyes.

Alapag had a pair of triples in the stretch, Ranidel de Ocampo nailed a clutch trey of his own and Gabe Norwood pulled off a defensive gem as Gilas Pilipinas bucked the absence of Marcus Douthit to slay a demon that had been the scourge of national teams past.

But it was Marc Pingris who came up with a performance and entire nation embraced.

Playing on one good leg for the entire second half, the San Mig Coffee star battled a tall Korean frontline on his way to 16 points and 10 rebounds as he, de Ocampo and Japeth Aguilar heroically filled in for Douthit, who left the game with five minutes left in the second quarter and never returned.

“I got kneed again in the same place where I got hit [in the Qatar game] and it hurt really, really bad,” said Douthit.

And as Douthit left the court, de Ocampo, Pingris and Aguilar pulled together to man the frontline for Gilas Pilipinas.

“Puso lang talaga (it was all heart),” said a teary Pingris during the post-game press conference. “Magpapakamatay na kami kung kailangan para sa bayan (we were ready to give up our lives for the country).”

“Kailangan namin mag step-up eh (We needed to step up),” said de Ocampo, who was practically sobbing in the press conference and needed several minutes to compose himself before he could speak. “Kumbaga sa giyera, nawalan na kami ng tangke kaya tao-tao nalang ang labanan (If this were  a war, we lost our tank and we had to fight man-to-man).”

And Gilas Pilipinas certainly did not want for heroes after Douthit went down.

Jayson Castro sparked a huge rally in the third quarter, tearing up the Koreans’ interior defense with daredevil drives to the hoop and then setting his teammates up when the defense collapsed on him to help the Philippines turn a three-point halftime deficit to a 65-56 edge entering the fourth.

Somewhere in between that, the Philippines even took a 63-53 cushion also with the help of a constricting defense that held Korea’s top scorer Cho Sung-min to just six points, none in the second half.

At that point, Spain never felt nearer. But recent history has always been cruel to Philippine basketball.

“We’ve come so close in the past, but it always seemed like we could never get over that hump,” said Alapag.

Korea has even been crueler, having caused some of the most painful defeats in Philippine basketball history.

In 1998, Tim Cone’s Centennial Team lost a classification game to Korea in the Bangkok Asian Games, thus running straight into a knockout semifinal match against China, which the Philippines lost. In 2002, a team coached by current Gilas assistant Jong Uichico dropped a heartbreaking semifinal loss to Korea after Olsen Racela missed two key free throws that allowed Lee Sang-min to win it with a triple at the buzzer.

And in the 2011 Fiba Asia Championship, Gilas Pilipinas, under coach Rajko Toroman lost a heartbreaker of a game in the battle for third.

Although revenge was never a motive for Saturday night’s game, Reyes gave a shoutout to all those pained by the Koreans.

“We decided not to talk anyore about the past,” Reyes said. “But this is for Jong, for Olsen, for Rajko and for all those who had tough times against Korea.”

And it looked like the Koreans were about to add another heartache for the Philippines. And Kim Mingoo wanted to author this latest burn.

The 6-foot-3 guard finished with 27 points and nailed five triples as he led a Korean rally in the fourth period. He opened the final quarter with back-to-back triples and then further put the Philippines in peril with a rare four-point play brought Korea to within a point, 73-72, 4:40 remaining.

Lee Seung-jun than scored on a dunk and had a split from the stripe as Korea pushed Gilas Pilipinas behind, 73-75.

That was when Alapag, de Ocampo, Pingris and Norwood took over.

Alapag nailed a triple to push the Philippines back ahead, 76-75. After Korea regained the edge on a Kim Tae-suk jumper, de Ocampo sandwiched a Korea turnover with a layup and a booming triple of his own to give the Filipinos an 81-77 spread, 1:31 to play.

Yang Dong-geun hit two free throws to push Korea to within two, but Alapag had another huge triple to make it 84-79, 53 ticks remaining.

“You know, it’s funny,” Alapag said. “When those shots were going in, it was kind of a surreal moment. I didn’t realize it until maybe 20 seconds left and I was on the bench and for about a two- or three-second stretch, things just kind of went in slow motion.”

Korea had one last gasp after that. Off a timeout, Kim Mingoo had another free look at a triple, but this time Norwood rose to block the shot.

After Norwood got a hand on the ball, he tipped it to de Ocampo, leading to a Castro drive. Castro missed but Pingris cleaned up the rebound and then scored a putback to ice scoring.

“It’s a proud, proud moment to be a Filipino,” said Alapag.